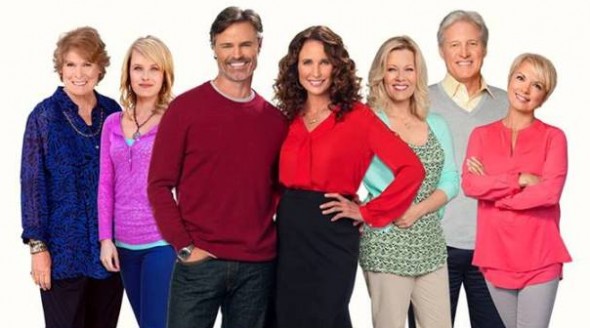 TV show description:
Based on the series of books by Debbie Macomber, this romantic drama follows the life of Olivia Lockhart (Andie MacDowell), a municipal court judge from the small seaside community of Cedar Cove. Divorced and trying to recover from the loss of her son, Olivia struggles to balance her career with family and the possibility of finding love — all the while doing her best to care for her town.

As the story begins, Judge Lockhart is overjoyed to hear that her name is being put forth for appointment to a Federal judgeship in Seattle by her longtime senator friend. Olivia asks that her family keep the news a secret.

Jack Griffith (Dylan Neal) is the new editor of the Cedar Cove Chronicle and is desperate for a meaningful news story. He corners Olivia’s mother, Charlotte Jeffers (Paula Shaw), who inadvertently tells him about everything in her daughter’s life — including the possible appointment. Suddenly, much to her chagrin, Olivia is front page news.

In the meantime, Olivia’s feelings about Seth Gunderson (Corey Sevier) — her insecure daughter Justine’s (Sarah Smyth) high school boyfriend — couldn’t be colder. Her feelings aren’t helped by the fact that Olivia is still getting over the death of her son, Justine’s twin. His death played a large role in her ex-husband Stan (Andrew Airlie) leaving the family.

Series Finale:
Episode #36 — Getting To Know You, Part 2
Early in the afternoon Grace and Olivia meet at the Captains Galley for lunch. As they eat, Grace shares the news about Maryellen and John’s engagement. Grace is worried they are moving to fast and that Maryellen might get hurt. When the conversation turns to Grace’s own wedding, Olivia urges Grace to ignore the differences between she and Cliff and see that their differences are what make them a good couple. Just as Grace nods her head in agreement, Paul drops by their table. Olivia tells Paul that she saw Anthony, and Paul confirms the news that he will be leaving Cedar Cove. Olivia wants to know why and feels Paul at least owes her an explanation. Paul won’t reveal his reasons, but he does invite her to go for a run later. She accepts, but she’s still intent on knowing why he is leaving Cedar Cove.

At Saget Development, Buck and Alex discuss the big Hampton’s development deal. As they talk, Warren walks into the office and announces that he will accept Buck’s offer to share signatory power with Alex. Thinking this will expedite Buck’s departure, Warren immediately asks when Buck will be leaving town. Buck responds, telling Warren then he’s not going anywhere and is instead sending his personal business partner, Alex. Warren is silenced in disbelief.

Back at Olivia’s house, Will sits outside enjoying his breakfast. Olivia shares the news that the couple whose car he hit has decided to drop the request for damages. When Olivia notified them that she didn’t want to settle the pair quickly dropped the charges. This turn of events confirms to Will that they were lying and Olivia now finally sees that. She apologizes to Will for not believing him and, for his part, he’s just grateful they can move on from the issue.

At the docks Justine angrily confronts Luke about his decision to reenlist in the Navy. She’s enraged that Luke didn’t’ talk to her about such a major decision. Luke apologizes and explains that he’s felt lost since leaving the Navy. Luke claims he loves her, but it doesn’t fix the hurt. Justine storms off, saying she is the one who needs time alone.

At the courthouse, Rebecca appeals to Paul to lift her suspension. Standing his ground, Paul reminds her of why she was suspended in the first place. He tells her practicing law is a team sport, not a stepping-stone for her next career move. And, seeing her still trying to prove herself, Paul says he has no reason to believe that the suspension has helped her learn that lesson or had any effect on her attitude.

Outside at Moon’s, Gloria, Corrie and Roy finally have a chance to sit and talk. Gloria explains that she came to Cedar Cove to confront them but once she was arrived, she changed her mind and decided that she wanted to get to know them. Corrie breaks down and tells Gloria that not a day has gone by that she hasn’t been thinking about her. She and Roy then tell her that they want her in their lives very badly and they all agree to start anew. Later, Corrie and Roy break the news to Linnette that Gloria is her sister. Linnette’s stunned by the news and angrily storms away from her parents.

At the navy base, Luke talks to Vice Admiral Nelson about reenlisting. Luke explains that he misses the feeling of purpose and brotherhood. What’s more, Luke explains that he feels guilty for being alive. Luke’s story isn’t unique and the admiral has heard it from many other soldiers. Unfortunately for Luke, his past struggles with PTSD present a significant hurdle for his desire to reenlist. Admiral Nelson tells Luke that in order to find a new purpose in life, he needs to face whatever it is that’s challenging him and make peace with it.

Later in the day, Grace and Cliff meet down by the beach. Grace tells him she has given it a lot of thought and she wants to go with the simple wedding, minus the choir and the doves. She tells Cliff that she wants to embrace their differences, and stop with the back and forth about the wedding details. Cliff agrees and they share a warm hug, both seem happy with meeting in the middle.

At Olivia’s house, it’s late but Olivia is still up waiting for Jack to arrive home. When he finally makes it home Olivia tells him about Grace’s wedding and that she thinks it could be a fun date night for them both. Jack immediately resists giving a firm yes and instead tells Olivia that he will try to be there. His answer is unacceptable and Olivia, frustrated, tells Jack that she wants a partner, not a roommate. Jack tries to convince her that he’s putting his all into their relationship but it’s not enough. Olivia tells Jack that the thinks they both deserve more.

After taking some time to think, Linnette calls Gloria and asks her to meet. The anger immediately rises when Gloria finally arrives. Linnette is incensed that Gloria lied to her about who she is and why she’s in Cedar Cove. Gloria tries to explain her situation and why she did what she did but Linnette is having none of it. She wants nothing to do with her newfound sister and tells Gloria to stay away from her.

Back in Seattle at the Chronicle, Jack and Eddie meet with David to discuss assignments. Eddie begs off doing a series on infrastructure and thinks Jack should handle it. Jack agrees and lets Eddie know that he can run the paper while he is gone, after all Eddie is his second in command. That prospect doesn’t sit well with David and he later calls Eddie and asks him to write the infrastructure series. Eddie is flustered and confronts Jack about the situation. Jack pointedly calls Eddie a privileged, overeducated kid who has lots of attitude and no skill. Jack tells him if he wants to learn he needs to roll up his sleeves and get real life experience. Jack’s speech puts the ball squarely in Eddie’s court.

Olivia is in chambers when Paul drops by with a brief. Paul’s leaving is the talk of the courthouse and Olivia desperately wants to know why. Paul finally comes clean and tells her that he doesn’t want to leave, he wants her, and not just as a colleague. Paul has fallen in love with her, but he won’t stay and blow up her world. Olivia has Jack and Paul does not want to cause any trouble, but he can’t stand by and pretend that he is not falling for Olivia. He thanks her for opening his heart again. Olivia is speechless.

Grace and Cliff’s wedding day has arrived and Olivia, Jack, Will and Justine are getting ready to leave the house. Will, whose been searching for a rental home, hits a stroke of luck when Jack comes forward and offers to let Will rent his house. Olivia hesitates at first, thinking Jack may need his own house again, but in the end everyone agrees that it is a marvelous idea.

At Grace’s house, mother and daughter are almost ready. Grace is nervous but Maryellen urges her to trust her heart. Grace tells her that she cannot elope- she can’t deny her mom the joy of helping to plan her wedding. Maryellen agrees.

At the wedding the guests have begun to arrive. Buck, Alex and Warren meet at the punch bowl. The father and son seem to broker a small peace. Buck tells his son that he is a Saget not a quitter.

Luke shows up at the wedding. Justine is surprised to see him and tells him that he should not have come. She doesn’t want him to feel obligated to be with her. He knows that, and also knows that he is not sure if he can be the man she deserves.

It is time for the ceremony, and Paul makes eye contact with Olivia. The share a nod and Jack notices the interaction. Bob walks Grace down the aisle and she is surprised by the beautiful live music and abundant flowers. She is thrilled and happily meets her groom for the ceremony. Olivia happily officiates as Cliff and Grace finally and officially tie the knot.

After the ceremony, Olivia takes a break from the crowd and looks a bit weary from it all. Paul approaches her and before he leaves town, he wants to know if by any chance Olivia feels the same for him. She smiles and looks away, unable to answer. (Courtesy Hallmark.)
First aired: September 26, 2015.

What do you think? Do you like the Cedar Cove TV show? Do you think it should have been cancelled or renewed for a fourth season?

Didn’t realize it was cancelled. Would like to see a final season.

I definitely think it should be continued. I loved the series and really would like to see more. Had not missed a season or episode so far.

Renew. This is a great series. Needs to be continued. At least one more season.

If Hallmark chose to cancel the show there should have been an ending where loose ends and stories were tied up and concluded. All of a sudden there were no more episodes and watchers were left wondering what happened to the show and the characters in it. Very bad conclusion to a series.

I love the show. Consider to add a final season.

Wow this series is better than Chesapeake shores. Hallmark should consider continuity of Cedar Cove, perhaps this was just aired at the wrong time.. I think telling a good story or book series such as this is worth more than just ratings..

I loved the show and have been waiting for its return not realizing it had been canceled. That’s a bummer.

The show has been so good. Please consider renewing it another season.

Cedar Cove was fun to watch and I want to know if Olivia had feelings for Paul, if Luke and Justine get married, etc.. I have been watching on NetFlix, for the first time, every evening, and it ended so abruptly!!! Very, disappointing!

would like to have seen closure on the series