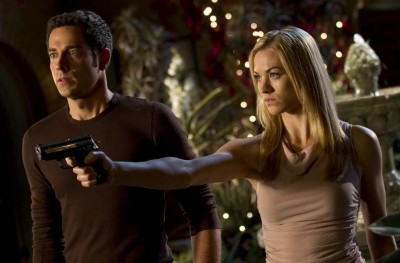 It’s being reported by various sources that Chuck has cheated death (read: cancellation) once again. NBC has nearly closed a deal that will bring Chuck Bartowski and friends back for a fifth season. TV Line reports that the peacock network is making a deal with Warner Bros for at least 13 episodes.

Of course, cheating death is nothing new for the TV series. It’s been on the bubble each season and has narrowly escaped being cancelled each time. Fortunately for Chuck fans, the rest of NBC’s schedule has been such a disaster that Chuck’s numbers end up not looking so bad. Had the series been on one of the other three major networks, it would have surely been cancelled long ago.

This season, Chuck’s ratings have been the worst yet. The last two episodes have registered a meager 1.4 rating in the 18-49 demographic and 4.1 million total viewers. The season average is only a 1.7 rating and 5.19 million. Aside from Chase, whose remaining episodes are being burned off on Saturday nights, Chuck is the lowest-rated scripted program currently on the network.

With four seasons and 78 episodes already in the can, it seems very likely that Warner Bros. worked out a deal with NBC for a final season so there would be enough episodes for a syndication package. A sixth season seems highly unlikely but who would have guessed that Chuck would have gone this long?

Bookmark our NBC cancel/renew page to keep track of the status of the current NBC shows.

What do you think? Are you glad to hear that Chuck is being renewed? Do you think this will be the end?

Please renew Chuck it is the best show !!! It is such an exciting show full of Great moments .

i really do like chuck the series.but i was hopefully thinking that chuck would be much greater if the chuch who be much more of an action hero even w/o the intesect.it would be a shame since he married sarah

Chuck is Great !!! The cast really work well together.They make you laugh,tear up,and make you wonder what’s next.It’s a one of a kind show that’s fun to watch.I have all four seasons on dvd.I’m glad they’ll be back for season five.Ill get that dvd too.Once they’re gone,what’s left?I don’t watch reality or talent shows.I’m not a fan of Ashton Kusher,so I’m done with Two and a Half Men[except reruns].NCIS,Law and Order,and CHUCK !!Oh,and King of Queens and Evertbody Loves Raymond reruns [or my dvds’].

I love Chuck and have watched from the beginning. I would love to see it run forever though I know that won’t happen. I’m so tired of reality shows and talent competitions — I find them boring. Chuck has likable characters, comedy and action. It’s just a fun show. I will be very sorry when next season ends. How about 2 or 3 more seasons? : D

CHUCK…the best!!!
so glad it is coming back, having been waiting and looking for it to come back on, finally an answer:) OCTOBER
Must say that my husband is a BIG fan of the law and orders, csi and ncis…and he even looks forward to CHUCK, it just has a different spin that is very applealing.
Thanx NBC
Hope you see the value in this show!!

they only care about commercial income, seems the network does not get it, when commercials start we all switch to another channel read and learn for once in your lifetime, we hate commercials, network still have the dream that we look at commercials like we look at a tv serie DREAM on, chuck apperntly had a good sponsor SUBWAY and even made me go to the subway, these sponsors are better then real commercials and even works. CHUCK keep it alive i love the whole cast

so sad office, law and order 30 rock all bad series all renewed every year over, comes up a good serie network is only looking at $$ nothing else, Chuck should have at least more seasons then 5 only, seems the network does not want to spend money on a good serie they rather spend it on another law and order serie or maybe CSI crap serie all police and borring series i love chuck and i’am pissed off then once again nbc cancels a good show reputation of the nbc is 0.00000 people on the board are only thinking… Read more »

I am so happy thatChuck will be back again for another series. This show is exciting, with challenging plots that the whole family can watch! All of the characters are well thought out and entertaining. Can’t wait for the new season!!!!

This is one of the Greatest shows on TV because you don’t have to sit and wait for all the dramatic BS to take place. This show is clever and moves which always keeps you watching – The tough part is it’s hard for new viewers to step into what is already going on . This is better than most of the crap on any other network.

So glad Chuck is continued…can’t think of another show that has humor (love the buy more employees), action and a great soundtrack quite like this series. So tired of reality shows! Chuck is always worth watching.

I LOVE CHUCK! I LOVE CHUCK! I have been a faithful fan and watched every episode since the beginning! I am so happy Chuck has cheated the network chopping block again. I definitely agree that it has a nice mixture of comedy and mystery. I think the whole cast blend together so well and I have been a fan of Zachary Levi since he was in Less Than Perfect. I hope this fifth season turns into the sixth!

We LOVE Chuck and are delighted at its return! We never could figure out why it didn’t take off-it seemed to have it all: quirky well-written characters, a good mix of comedy and mystery, and just was a lot of fun. I suspect its scheduling opposite “Dancing With the Stars” might have had something to do with it. Maybe this time it can be placed better.

Thanks for continuing with CHUCK, the variety of cast characters is wonderful, i find the combination of character interactions has been great -MEANING, – the comedy of the STORE PERSONALITIES with the seriousness of the SPY PERSONALITIES is wonderful. When a show FOCUSES on only one of these, IT TENDS to be less interesting to me, – all the classic shows have incorporated BOTH THESE elements in their shows, so i hope you all conintinue to do that with CHUCK, OK?
CHUCK KENNEY

Love the show, which is due to the cast, who make the show. Shame noone watches (just about anyway) it as it is a quality show and a show that’s unique and original. Dunno whether it has anything to do with the selected day/time line-up by NBC, but jus wish more americans would watch it, cause that’s what matters to the networks. Also for everyone hoping for a sixth season and so on, the show has been CANCEL’D with a 13 episode pick-up for the last and final season 5, so there is no chance for another season, well unless… Read more »