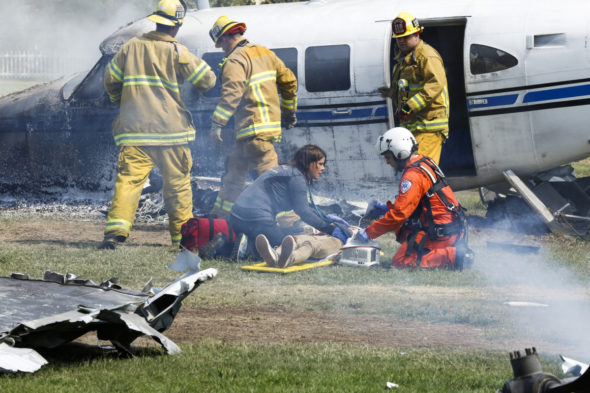 Angels Memorial is closing its doors. CBS has cancelled its Code Black TV show after three seasons. Creator and showrunner Michael Seitzman has already confirmed the Code Black cancellation. Although the production utilized the extraordinary measures of amputating some original series regulars (Raza Jaffrey and Bonnie Somerville) and grafting on a big name (Rob Lowe), the patient eventually succumbed to acute ratings anemia.

According to Seitzman despite the cancellation, the third season should continue to air in its regular timeslot. Because he expected the there would be no season four, it seems the team wrote the season three finale to serve as a series finale. Check out what he has to say, below.

The third season of Code Black, which just kicked off on April 25th, is averaging a 0.71 rating in the 18-49 demographic and 5.448 million viewers. Compared to season two, that’s down by about 26% and 9%, respectively.

Of the 27 scripted CBS TV shows we’ve been tracking during the regular 2017-18 television season, Code Black ranks 23rd in the demo. That number only rises to 21st, when we sort by average total audience. In other words, the cancellation makes business sense.

Making sure to thank the fans, Seitzman, whose Quantico on ABC also fell prey to the Television Vulture, announced Code Black will not return for season four. Check out what he has to say about the remaining episodes and anticipating the need for a Code Back TV series finale.


Dear #CodeBlack fans, the sad news came today that we were cancelled. It's been a true joy to make this show and watch your response every week. Thank you for all of your passion. Truly, our best episodes have yet to air. We hope you'll watch and enjoy them. We made them for you.


Nine new episodes still to air. You're going to love them. See you back here next week! https://t.co/WkYs7aG6s2


No way. This season finale was written to be a series finale. You won't want to miss it. https://t.co/JOm7y61R7p


We always suspected this would be the last season. We wrote it to end that way. https://t.co/AByfkZ5Da0


They will all air in their regular time slot, except next week will be a double header starting at 9pm. https://t.co/zQa9obAMRj


Nine more episodes until the epic #CodeBlack series finale. This is where it began… pic.twitter.com/yR4NiwnRyc

What do you think? Are you a fan of the Code Black TV series? If it were up to you, would it be cancelled or renewed for season four on CBS? Sound off in the comments.

Aarrrgggg. Nooooooooooo! How can this be? This was one of the most intense, incredible, drama packed shows on television! How did it possibly have low ratings? I am so disappointed!

This was a great doctor show!!! One of the few I liked!! I’m really gonna miss it. It also had a great storyline with all the characters!! Such a shame they’d let it go!!