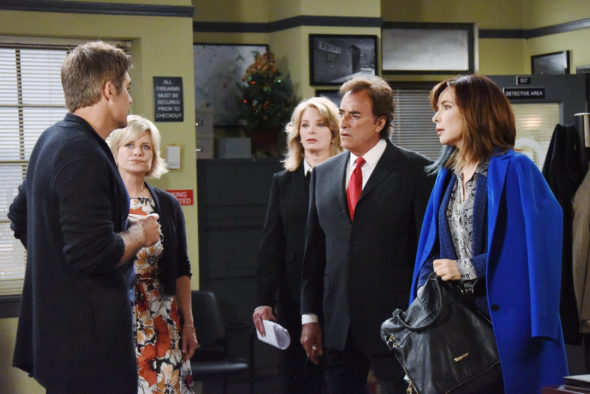 Are the days numbered for Days of Our Lives? According to People, Megyn Kelly’s new daytime series could replace the long-running NBC soap opera.

Earlier this week, we reported the former FOX News host will be moving to NBC, where she’ll host a daytime program, a Sunday evening newsmagazine, and contribute to NBC News.

While the plans for Megyn Kelly’s new role at NBC are still unclear, People reports the cast of Days of Our Lives has been told this year will be the show’s last season. The soap, which began in 1965, is one of the longest-running programs in television history. However, the show has been in ratings trouble for some time. Currently, Days of Our Lives ranks last out of the four big daytime soaps — General Hospital, The Bold and the Beautiful, and The Young and the Restless.

NBC has only renewed Days of Our Lives through 2017, but the network has yet to comment on whether the soap will return or be cancelled.

What do you think? Do you watch Days of Our Lives? Do you think it should continue or be cancelled?

If DAYS is cancelled I will no longer watch NBC. After ABC cancelled All my children and one life to live I stopped watching ABC except when GH and Grey’s are on. I haven’t watched one other show on ABC in years. I think it’s so unfair to us soap addicts that our shows are disappearing. Please, don’t take away something that means so much to us. I have watched soaps for 45 years. I watched them with my Grandmothers, my mom, my aunts, my sister, my kids and even my husband when he worked at night. Please don’t take… Read more »

I think this is crazy! a show that has been on the air for 50 years to be replaced by Megyn Kelly a very crude, unpopular, unpolished bimbo who is a fad at best. She has no more talent than a trained poodle! I don’t think the audience who watch “Day’s of our lives will relate to a woman like Megyn Kelly a far left loon. The best and most effective way to stop this is call the owners of the companies who advertise their products and tell them you are going to boycott their products because of cancelling “Day’s… Read more »

I’ve been watching Days of Our Lives since I was 10 years old, my Grandmother watched it from the time the show started, so when I would get home from school we’d watch it together faithfully, I’m now 57 and I still watch Days faithfully, I’ve grown up with the Horton’s, the Brady’s, and all in between. They feel like family and I love the show, the characters, and the storyline. When watching you just feel like your there. I along with millions more would be lost without Days, to fill our Days. There are so many talk shows on… Read more »

As long as this show been on , it shouldn’t go by ratings it should have a sertain clause for shows that make it that long , expecially daytime shows . Nights should have enough ratings to hold day ratings . Add more movies at night and that might be enough ratings for both . Just saying .

Please do not take days off the air it started the year I was born I’ve watched it as.long as I can remember life just won’t be right with out days in it!!!!!!!!

If Megyn Kelly takes DOOL place for her new show, I will never watch her, again. I’ve been watching DOOL all my life and it is far better than watching any Megan Kelly, show. Yes, she’s pretty and Yes, she talks great…but DOOL has been apart of my life since I was born. It can not be replaced in my heart or life. If she takes DOOL time slot, I will turn my channel from NBC26 to Fox54, forever. I lost out when Another World, Santa Barbara and Passions were cancelled by NBC. This time I will cancel out NBC… Read more »

Why were my comments remove? I love Days and never want to see it canceled. I’ve watched for 45 years. Please don’t remove it.

Please do NOT take off Days!!!! It’s is the thing I looking forward to watching! I have watched it from the beginning, with my mother! Now, my husband is hooked on the show with me! My sisters and talk about what happened on the show! So, Please save Days Of Our Lives!!!

Poor Megyn Kelly….if she thought sparring with Donald Trump was bad, just wait til she is the reason for cancelling one of the longest running soap operas of all-time…

Yeah, that will go over well.

please keep the show on.I am disabled and the show makes me happy and gives me something to look forward to everyday. How many more news shows or talk shows do we need? At times some of them repeat other shows.

I think they should continue showing days . after running for 50 yrs why would you mess with? it ticks me off they are even concidering it. the whole day will be nothing but talk shows and news. PLEASE DONT TAKE OFF THE ONLY GOOD SHOW THERE IS ON.