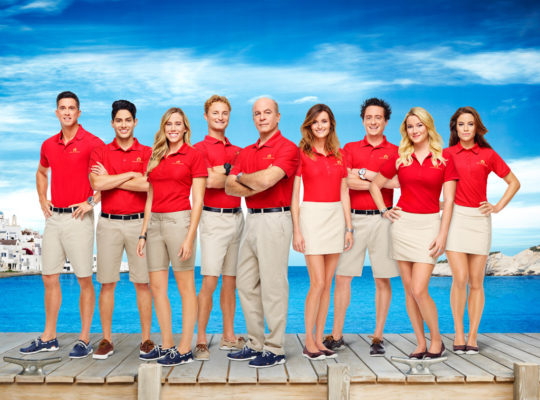 Bravo is headed back to the Mediterranean Sea. This week, the network announced season three of Below Deck Mediterranean will premiere in May.

The reality show follows the crew of a luxury yacht as they travel the scenic Mediterranean Sea coast. Season three of Below Deck Mediterranean premieres on Bravo on May 15th at 9 p.m. ET/PT.

NEW YORK – March 29, 2018 – Bravo Media sets sail for high sea adventures with season three of “Below Deck Mediterranean” premiering Tuesday, May 15 at 9pm ET/PT. This season cruises through scenic Italy, one of the most historic and desired yachting locations in the Mediterranean. Captain Sandy Yawn is once again at the helm of the 178′ “Talisman Maiton,” the largest superyacht in Below Deck history. Joining Captain Sandy from last season are Hannah Ferrier (Chief Stew) and Adam Glick (Chef), along with a new set of “yachties” Brooke Laughton (Second Stew), Kasey Cohen (Third Stew), Conrad Empson (Bosun), Joao Franco (Lead Deckhand), Colin Macy-O’Toole (Deckhand) and Jamie Jason (Deckhand).

In season three of “Below Deck Mediterranean,” the crew voyages from Naples to Capri to Positano, taking in a plethora of breathtaking stops along the Amalfi Coast. During one of the best charter seasons yet, Captain Sandy risks giving Hannah and Chef Adam a second chance. But will they find redemption and get back in Sandy’s good graces? New Bosun Conrad cannot seem to keep his eyes off one of his fellow crew, but quickly learns the ups and downs that come with mixing business and pleasure. Meanwhile the resident “boat flirt” and lead deckhand Joao vies for the affection of not one, but two stews. Looking to approach this charter with a fresh outlook, Hannah’s hoping for a dream team with stews, Brooke and Kasey, but quickly realizes she has more than her hands full when seasickness gets the best of one of them. Eager to master the exterior, deckhand Jamie struggles when she’s constantly pulled to help cover for one of the stews. A former ferry boat captain who is new to white glove yachting, deckhand Colin is anxious to join the team and willing to pick up the extra load when needed. This season the crew will encounter everything from hurricane winds, lightning storms and tending to the unimaginable demands of their high-profile guests, but the ultimate test these “yachties” face is overcoming their differences in order to succeed in the “work hard, play hard” world of Below Deck. For a sneak peek of the new season head to: http://www.bravotv.com/below-deck-mediterranean/season-3/videos/this-season-on-below-deck-mediterranean

With over 28 years of yachting experience, Captain Sandy Yawn has chartered yachts from the Mediterranean to the Persian Gulf. Being only one of a handful of female captains in the yachting industry, Sandy has overcome countless stereotypes, a life threatening motorcycle accident, and even cancer, to become one of the most respected captains in yachting. For Sandy, the guests always come first and she will do everything in her power to satisfy their every need. She expects nothing but perfection from her crew to deliver seven-star service at its finest. In her down time, Sandy enjoys skiing, scuba diving and is passionate about giving back. She’s a proud supporter of Jacksonville School for Autism, and is involved in many other organizations focused on helping children. This season Captain Sandy is ready to lead her new crew and bring her unique management style back to the Mediterranean.

Adam is a casual California surfer who travels and lives in his camper van when he’s not on charter. He likes to consider himself the “adventure chef,” always seeking new heights and challenges and befriending strangers wherever he cooks. After earning his degree in Culinary Management from the Art Institute of California – San Diego, and working in San Diego’s finest restaurants, he set out for the open ocean. Working on yachts for over 10 years now, chef Adam has vast experience as a high-end gourmet chef, both on land and at sea. Like many chefs, he considers himself strict in the kitchen, where he enforces a “my galley, my rules” policy. After a soul-searching summer traveling through the Pacific Northwest foraging with his van, Adam returns to the Mediterranean with a renewed sense of focus and a stronger culinary game. Although he is interested in a relationship with the right girl, he is determined to stay focused this charter season and not let his love life on the boat derail his plans.

Hailing from Sydney, Australia, Hannah Ferrier is in her eighth year as a chief stew. Successfully able to maintain her work hard, play hard mentality, Hannah is a self-proclaimed “Independent Woman,” and has become accustomed to the luxurious lifestyle which she has built for herself. Splitting her time between Australia and the South of France in the off-season, she’s currently unattached but still looking for Mr. Right. In her third season on the Mediterranean Sea, Hannah is still searching for what’s next for her career wise while still stewing, but is looking forward to settling down in the future.

Brooke grew up in Manchester, England, going on lavish vacations and last minute holidays chartering catamarans. During college, she was an aspiring journalist and while on assignment, she learned about working in the yachting industry and the adventures it has to offer. However, because of her upscale upbringing, Brooke had everything to learn about the service industry from how to do laundry to delivering the high level of service she grew up enjoying. Brooke got her first job on a high profile sailing yacht amongst the Hollywood Elite, and has since quickly climbed the ladder. Despite her parents’ split a few years ago, Brooke remains a hopeless romantic who loves to love, could a “boatmance” be in store for her?

A New York native like her father, Kasey grew up in Oceanside, New York, but also has roots in Colombia with her mother hailing from Bogota, giving her a natural balance and worldly view, one for which she is very grateful. However, Kasey admits that she had an upbringing that was a bit sheltered and privileged which she enjoyed. Always a go-getter, she gained much of her confidence and charisma from doing pageants, but she also mastered her studies early on as a straight-A student in high school and earning a bachelor’s degree in psychology. She may not have the most experience on the boat, but she has a real determination to succeed.

This baby-faced Bosun hails from the UK and has been in yachting for almost four years now. Conrad’s mother also worked in the yachting industry, so she encouraged him to begin working on boats at an early age. He took his first yachting job when he was 18 and hasn’t looked back since. Though his mischievous grin and jovial nature make him easy to forgive, Conrad admittedly tends to speak without thinking – a quality that has gotten him in a bit of trouble in the past but has also proven to be useful in entertaining high-end clientele.

Jo�o grew up in Zimbabwe in the midst of political strife and corruption, where surviving became a daily objective. Highly motivated, Jo�o left home at the age of 20 and parlayed a job doing day work at a Captain’s house to working on his boat. His independent spirit made him clash with his superiors at first but inspired by the success of the guests who chartered the boats he worked on, he quickly adapted the “work smarter, not harder” mindset to climb the ranks in his yachting career. When it comes to dating, Jo�o admits he “wins the hearts of many and disappoints quite a few.”

Colin grew up on the south shore of Long Island, New York and has a degree in music. Although music is his passion, boats are his life. He started working as a deckhand at the age of 15 and currently is a Ferry/Port Captain to and from Fire Island. Colin is single and loves to make others laugh with his infectious sense of humor. He is a quintessential momma’s boy, who has a very strong connection to his friends and family. This fish out of water may get homesick, but he is excited to learn more about white glove yachting on his new adventure.

Upon meeting Jamie, it’s hard to believe that this dark-haired dynamo identifies herself as a “class clown”… but Jamie is just that. With a wicked sense of humor and sharp tongue, the South African-born beauty keeps everyone laughing – when you’re not on her bad side. Always an active soul, Jamie grew up riding horses competitively and has always been on-the-go. She lived in California for two years before deciding to travel to Antibes, where she began her yachting career. On Jamie’s last boat, she was the sole stewardess and deckhand on a 24-meter motor yacht.

What do you think? Do you watch Below Deck Mediterranean? Will you watch season three?