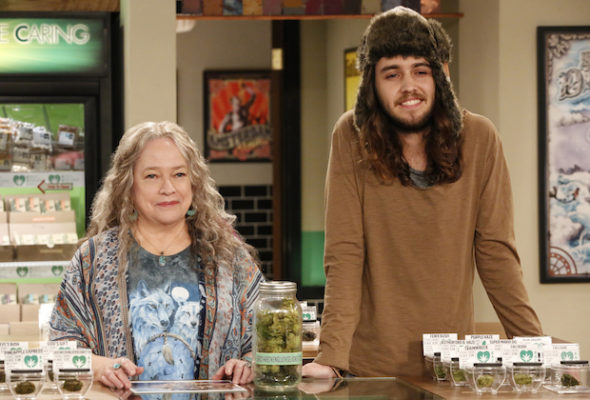 Does the second season of the Disjointed TV show on Netflix make viewers hungry for more? As we all know, the Nielsen ratings typically play a big role in determining whether TV shows are cancelled or renewed. Netflix and other streaming platforms, however, collect their own data. If you’ve been watching this TV series, we’d love to know how you feel about the Disjointed season two episodes. We invite you to rate them for us here. You can vote on season one here.

A Netflix comedy, Disjointed stars Kathy Bates, Dougie Baldwin, Elizabeth Ho, Chris Redd, Tone Bell, Aaron Moten, Elizabeth Alderfer, Betsy Sodero, Nicole Sullivan, Michael Trucco, and Mae Harrington. This workplace sitcom centers on Ruth Whitefeather Feldman (Bates), who has long agitated for the legalization of cannabis. After years of advocacy, she is finally the proud proprietor of a Los Angeles-area marijuana dispensary. Ruth’s staff consists of her 20-something son, Travis (Moten), three budtenders, and a security guard. If this crew had an anthem, surely it would be Bob Dylan’s “Everybody Must Get Stoned.”

What do you think? Which season two episodes of the Disjointed TV series do you rate as wonderful, terrible, or somewhere between? Should Netflix have cancelled or renewed Disjointed for a third season instead? Don’t forget to vote, and share your thoughts, below.

Please bring this show back, love it ! Been recommending it to everyone I know

My husband and I truly loved this show. It dealt very well with some touchy issues and made us laugh