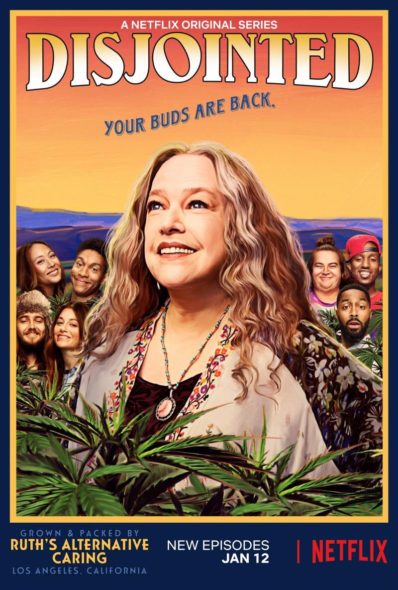 While there’s smoke, is there fire in the first season of the Disjointed TV show on Netflix? As we all know, the Nielsen ratings typically play a big role in determining whether TV shows are cancelled or renewed. Netflix and other streaming platforms, however, collect their own data. If you’ve been watching this TV series, we’d love to know how you feel about the Disjointed season one episodes. We invite you to rate them for us here.

A Netflix comedy, Disjointed stars Kathy Bates, Dougie Baldwin, Elizabeth Ho, Chris Redd, Tone Bell, Aaron Moten, Elizabeth Alderfer, Betsy Sodero, Nicole Sullivan, Michael Trucco, and Mae Harrington. This workplace sitcom centers on Ruth Whitefeather Feldman (Bates), who has long agitated for the legalization of cannabis. After years of advocacy, she is finally the proud proprietor of a Los Angeles-area marijuana dispensary. Ruth’s staff consists of her 20-something son, Travis (Moten), three budtenders, and a security guard. If this crew had an anthem, surely it would be Bob Dylan’s “Everybody Must Get Stoned.”

What do you think? Which season one episodes of the Disjointed TV series do you rate as wonderful, terrible, or somewhere between? Don’t forget to vote, and share your thoughts, below.

We are definitely wanting more!!! A group of vastly different cultures and problems come together creating a great show!!

This show made myself my fiance friends and family laugh when we really needed it during this pandemic. We weren’t aware of the show on Netflix in 2017 so it was our 1st time watching it and I want to thank EVERYONE including the actors how wonderful haven’t laughed that hard in a long time and I needed it thank you thank you!!!! I also have a very difficult situation where I was held at gunpoint and let’s just say I have to go to sentencing soon in Reno. I will bring thoughts of laughter you all gave me with

Bring Disjointed back… its amazing show and keeps me and my wife rollin laughin!!! BRING IT BACK PLEASE

Show is awesome love it bring it back