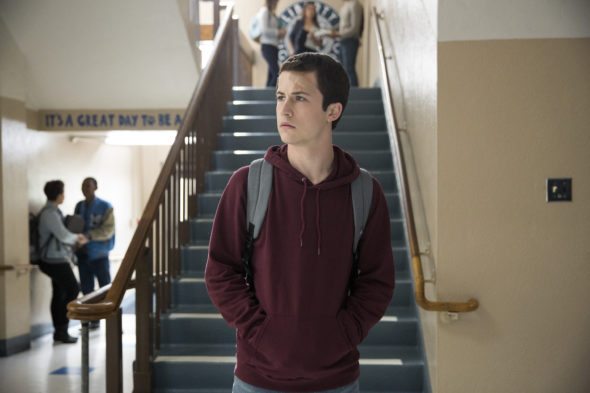 Classes will soon resume at Liberty High School. Netflix has announced that the second season of its 13 Reasons Why TV show will premiere in May. Watch the season two release date announcement, below. 13 Reasons Why, season two, debuts on Friday, Friday, May 18, 2018.

A Netflix drama, 13 Reasons Why stars Dylan Minnette, Katherine Langford, Kate Walsh, Derek Luke, Brandon Flynn, Justin Prentice, Alisha Boe, Christian Navarro, Miles Heizer, Ross Butler, Devin Druid, and Amy Hargreaves. The second season picks up, on Netflix, in the aftermath of Hannah’s (Langford) death. As the characters try to heal, Liberty High goes on trial, and someone is pulling out all the stops to conceal the truth.

About 13 Reasons Why Season 2:

Season 2 picks up in the aftermath of Hannah’s death and the start of our characters’ complicated journeys toward healing and recovery. Liberty High prepares to go on trial, but someone will stop at nothing to keep the truth surrounding Hannah’s death concealed. A series of ominous polaroids lead Clay and his classmates to uncover a sickening secret and a conspiracy to cover it up.

In preparation for the launch of Season 2, new resources will be added to 13ReasonsWhy.info including an updated Discussion Guide and a new Discussion Series – a set of videos where cast address issues in the series including bullying, sexual assault and drug abuse. We encourage you to explore these tools and direct readers to 13ReasonsWhy.info should they need help or support.

What do you think? Did you watch the first season of the 13 Reasons Why TV series? Do you plan to stream season two, when it drops to Netflix?