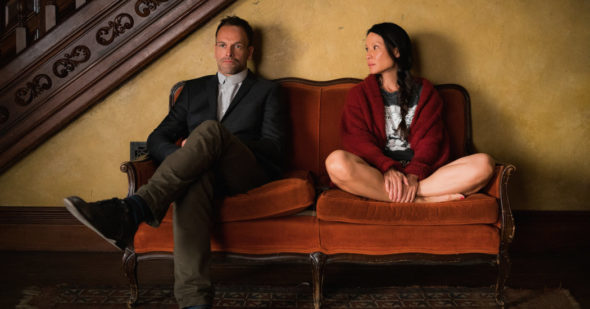 Despite low ratings and being omitted from the CBS series renewal order in March, creator and executive producer Robert Doherty is still hopeful his Elementary TV show will not be cancelled. He’s so optimistic, in fact, that he included cliffhangers into the Elementary season five finale episode.

TV Line reports Doherty is betting on a sixth season:

“I’m an eternal optimist,” Doherty tells TVLine. “I feel good. I feel like we’ve had a strong season. We’re certainly very pleased with the way it’s wrapping up. And trust me, there’s a lot of Elementary left in this humble writing staff. Many, many stories to come.”

Doherty adds that the Season 5 closer (airing Sunday, May 21 at 10/9c) was “absolutely” intended as “a season finale,” not a series ender. And if it does turn out to be the show’s swan song, viewers might be left without closure, seeing as how the episode features “a cliffhanger in a couple of respects.”

Elementary Season Five: A Look at the Ratings

The fifth season of Elementary is currently averaging a 0.67 rating in the 18-49 demographic with 4.94 million viewers. Compared to season four, that’s down by 30% and down by 14%, respectively.

Among other scripted CBS TV shows, Elementary ranks above only Doubt, which has already been cancelled, Training Day, which hasn’t been officially cancelled but will be, and Ransom. Although a renewal is not impossible, a sixth season of Elementary does not seem too likely.

What do you think? Are you a fan of the Elementary TV show? Should CBS cancel or renew it for season six?

There have been times when it was scheduled as a new show, but turning out to be a repeat instead. Oh, and not to mention the times it was scheduled and didn’t come on at all. And CBS blames the show for low ratings? True, it’s a thinking person’s form of entertainment–as much as one could get from this form of theater–so if this is what CBS wants to cancel, what is it saying to its viewership? I only know what its viewership would like to say to it!

Elementary should absolutely be renewed. It is one of the most intelligent shows currently on tv. It has suffered only due to scheduling issues. Even faithful viewers are having trouble finding when it’s on. Please renew it!

Definitely renew this show. One of the best. But please put it back on Thursday night.

Should definitely be renewed. Loved watching it

We will be SO disappointed if Elementary is canceled! So very few intelligently written series are prematurely canceled. We just can’t get enough of Jonny Lee Miller as Sherlock. All the main characters are engaging and entertaining, as are the plots and back stories.

We’re not all looking for the next Honey Boo Boo, ya know.

the series has always been entertaining-due to the leads and good writing-always seems to be fresh-unlike some of the other multi season dramas on cbs.Elementary deserves a season6.my favorite moments are when Sherlock will awaken Joan or use her office or room for an experiment-her reactions are priceless.

Please don’t cancel. This is my favorite drama!

One of the best shows on TV. Apparently the 18-49 group don’t have very good taste. Or, they record it and watch it later. Please don’t cancel this series.

Keep it! One of the few intelligent Series left in the vast, desolate wasteland of network television!

Please renew!! This is my daughter and my favorite show. We look forward to it every week. It’s witty and one of the few intelligent shows on network television.

Hoping this series is renewed……..great writing and acting and we look forward to each episode!!!!! So little programming that is enjoyable to watch any more! LOL……no one ever solicits our viewing preference…….of course, we are not in the 18-49 age group!!

I find Elementary to be the most interesting crime/detective/police shows on television. If CBS defaults, maybe somebody else will pick up this show.

This is one of my favorite shows. Please, please renew it. Actually it’s the best on Sunday night.

I agree until Game of Thrones comes back on Sunday July