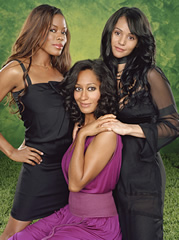 The long-running sitcom Girlfriends surprised many by returning for its eighth season last fall. The CW series was renewed for a full season of 22 episodes but, because of the writers strike, only 13 of those were completed. Now that the strike is coming to an end, the network is changing their plans. Would it have been better if the show had closed at the end of year seven?

The CW network has decided against putting the seasoned sitcom back into production for the remaining eight episodes. On top of that, they’re not bringing it back for season nine. Are this week’s episodes the last we’ll see of Joan (Tracee Ellis Ross), Lynn (Persia White), Maya (Golden Brooks), and the rest? Does this mean the fans will be left hanging?

Admittedly, Girlfriends’ season eight ratings haven’t been very good overall but it is the second most-watched sitcom among African Americans (bested only by Girlfriends’ spin-off, The Game). In late 2007, series creator Mara Brock Akil said she was hoping for the best but suspected that there wouldn’t be a ninth year. As a result, she conceived a contingency plan on how to end the show. She teased, “I think fans will be very happy.” Does that mean that Joan would get married? Akil would only say, “when we finally feel like Joan is really OK, I do believe the show is over.”

Unfortunately, with the network now cutting season eight short, it looks like she won’t be able to put that plan into action.

Though nothing is set in stone just yet, the network is currently considering putting together a special one-hour retrospective to close out Girlfriends. It would be made up of clips from past episodes. Though that sounds nice, it wouldn’t offer any kind of closure for the beloved characters — hardly a fitting send-off for a sitcom’s that’s been on the air for eight seasons. We’ll keep you posted on how this one develops. Stay tuned!

I am so upset that the TV show Girlfriends came to a close I love a positive show about black women and trails but through all the mess that those four women went threw and William they kept on moving forward with what they believe in no matter what life brought them. Back then there were good, educational, real life, inspiring, TV shows. Now its all about sex, fighting, no love but as Mya from Girlfriends would say but “O HEELLLLLLLL”::: Yes they have good ratings but what are those shows teaching our society nothing but hate. Back then TV… Read more »

I’m not African American but I still LOVE this show. One of my favorites!! I watched it when it first aired and here I am years later still watching it. I’m so pissed that they didn’t get their deserved season finale. All I gotta say is, OH HEEEEEEEEELLLLLLLLLL NO!!!

Angela I said they same thing I could not believe they did not get a final season finale!!! One of my favorite shows!!!

I am very disappointed that girlfriends and now the Game is off the air. I was a loyal fan of Girlfriend since it began. I also remember when the Game first started. The CW should be ashamed of how this all went down. Not to mention The Game time slot had changed I wasn’t exactly sure why but this could be a factor into why their ratings suddenly plummeted. I was so looking forward to more eposides of Girlfriends and the The Game. It never ceases to amaze me whenever African Americans attain something it is never for too long.… Read more »

I am very disappointed that girlfriends and now the Game is off the air. I was a loyal fan of Girlfriend since it began. I also remember when the Game first started. The CW should be ashamed of how this all went down.

I’m very disappointed that the Game is being cancelled or up in the air as they put it. I was a loyal viewer, I love the characters all of them the actors and actresses are great. The storyline kept you coming back for more. I don’t think it’s right that African American shows are always getting cancelled. Especially when the viewers are loyal. I know the time slot and day change may have had a big affect on the ratings, at first I would have to set my DVR to remind me that the time and day has changed. I… Read more »

I love girlfriends. Yall have to at least give them a proper season finale if nothing else. I have purchased the first two seasons and will be very dissappointed if there is no closure in the end.

Wow! I thought Girlfriends was taken off the air. We should let Girlfriends stay on for two more seasons. It will be right because The Crosby Show is the only other African American show that stay on that long or longer. Let’s support one another instead of hurting each other. These actors and actresses entertain us. We should give them the respect to let them have closure with their characters and with us. First and foremost, the networks should consider given the cast a proper send off. Bring back Toni’s character let her make peace with Joan and her ex-husband.… Read more »

girlfriends really touched home with me i had a similar situation with one of my friends that joan and toni went through and after 6 years we became friends again. I really loved that show it brought a side of me out i never new exist. whenever i was feeling down or mad i can always watch girlfriends and get a sense of confront. Im going to really miss that show.

I searched frantically through the channels trying to find my favorite tv show,girlfriends, when I could not find it I almost cried. You see(whoever is taking the time to read this) this sitcom made me feel like I had girlfriemds(which I do not) and I looked forward to seeing my girlfriends every week. I will miss laughing and crying with the most beautiful women on the TV Sceen!! sincerely yours,Mrs. McNeal

I love the show Girlfriends. I continue to watch it today. I am still seeing episodes that I haven’t seen. I hate the fact that the show had to come to an end, but I love the fact that it has my 4 favorite characters on it. (Joan, William, Mya, and Lynn)

Although it’s been almost 10 months since Girlfriends ended so abruptly, I’m still appalled and disgusted with how this show, the cast and us fans were treated. I’ve supported this show since day 1 and all of us deserve and have earned a proper series finale. We’ve invested our time and hearts into these characters so to leave us with all of these open ended stories and unanswered questions is unprofessional to say the least. We should stop giving CW any ratings or support. They obviously have no respect for their Black audience and it should not be tolerated.

I LOVED girlfriends and i was the only show i actually went out and bought. It was funny and true and i loved the characters. After eight long seasons I am very angry that this show has no finale!! CW is a piece of crap for being cheap on a show that obviously had many fans. Screw you CW!

That is whack.Cw u are lame. I think since ya’ll are not going to show more seasons of this show somebody needs to make a MOVIE for the close out of it.Just like Sex In The City.

cw11 what is wrong with you????????????????? First it was one on one, then all of us now girlfriend. They did not post anything about a SERIES FINALE, on any of these shows. I agree with T. Watkins. Sorry I’m late on writting this, I just found out today, about this website.

We knew this was going to happen Toni’s gone how much longer can you deal with Joan and Lynne . Maya was ok but Toni was the comedy .