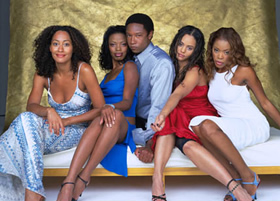 Self-indulgent Antoinette “Toni” Marie Childs-Garrett (Jill Marie Jones) is Joan’s friend since childhood and a successful real estate agent. After a lot of “gold-digging,” Toni falls in love with plastic surgeon Todd Garrett and the two marry following a brief courtship. After the two have separated, Toni gives birth to baby Morgan. Toni is still quite selfish but makes the choice to move to New York so that Morgan can be close to her father.

Perpetual student Lynn Ann Searcy (Persia White) was Joan and Toni’s roommate at UCLA and holds five post-graduate degrees. She supports herself through a number of truly odd jobs while searching for her own prince charming.

Joan’s one male confidant is William Dent (Reggie Hayes). He works with her as a senior partner at Goldberg, Swedelson, McDonald and Lee. William wisecracks about Joan’s dismal social life though his own isn’t much better. He eventually marries his manipulative aide, Monica Brooks (Keesha Sharp), whom Joan and her friends initially dislike.

The Game is a spin-off of this series.

I wish we could have seen Joan finally get married to Aaron. She was just so desparate to marry someone it was kinda getting on my nerves. And then she goes to propose to him and made a fool out of herself. She took the special fun and moment for him. She moves to fast in her relationships.Instead of just letting things flow and see how they turn out.Yes I wished we could have seen her get married.

Really hated to see this show go, felt like we we’re cheated out of finally seeing Joan walk down the aisle with her soul mate Aaron. At least make a Girlfriends movie and give us Closure please!

I wished this show wasnt cancelled but since Jill Marie let the writers were unable to keep the show’s initial charm and wit. I absoultly loved this show. It was inspiring. I wish to have this show again with it’s orginial cast. However if that’s not going to happen then it should stay cancelled. At least for me the show ended when Joan failed to make it to Toni’s court hearing on time. After that I started losing interest in the show’s plot. Or at least give the show a proper ending. It’s like the Wayans Brothers’ show all over… Read more »

I AM DISTRAUGHT THAT THEY CANCELLED THIS SHOW!! Girlfriends was one of the longest running Black shows and it didn’t even get a proper ending. I really hate the network idiots!!

I am recovering from a stroke, Girl friends was a show that I loved, please bring it back on tv. I know it was very important for a lot of people.

i would love to see the show girlfriends back onthis is a very good show .one night i turn my television on to a channel where i usally watch it ,it was gone.i was use to watching it on monday nights and sunday but now it’s gone.i would love to see toni back on there?please bring the show back.