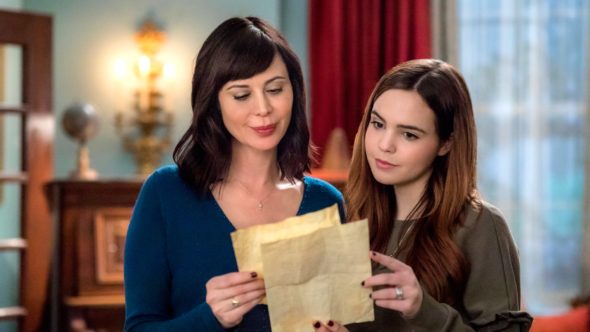 As we reported earlier, Good Witch will begin filming season five in Toronto this August. Hallmark Channel has yet to announce a premiere date for the new season, but you can read more details below:

BEVERLY HILLS, CA – July 26, 2018 – In the wake of continued strong ratings in its fourth season that concluded July 1, Hallmark Channel has renewed its hit, original primetime series “Good Witch” for season five. Based on the “The Good Witch” movie franchise that celebrated its 10th anniversary this year and was the most successful in the network’s history, the series stars Catherine Bell (“Army Wives,” “JAG”), Bailee Madison (Just Go with It, “Trophy Wife”) and James Denton (“Desperate Housewives,” “Devious Maids”). The announcement was made today as part of Crown Media Family Networks’ bi-annual Television Critics Association Summer Press Tour.

“The success ‘Good Witch’ continues to enjoy after 10 years on our network is a testament to the engaging characters our talented cast brings to life coupled with the magical storytelling that has carried from the movies to the primetime series,” said Michelle Vicary, Executive Vice President, Programming and Network Publicity, Crown Media Family Networks. “We’re thrilled to continue the journey in season five and can’t wait for fans to see what’s next for Cassie, Sam, Grace and the rest of the captivating cast of characters that inhabit Middleton.”

In season four, “Good Witch” ranked among the top two highest-rated and most-watched original scripted cable series of the week among Households and Total Viewers. Season four propelled Hallmark Channel to be the highest-rated and most-watched cable network during Weekend Prime among Households and Total Viewers for the full season, excluding sports.

Hallmark Channel’s strategy of programming original, primetime series on an increasingly competitive Sunday night has yielded great success. This is the third original series pick-up by the network in recent months, having also confirmed a sixth season for its drama “When Calls the Heart,” which boasted continued ratings growth in its fifth year and became the highest rated and most watched season of the series (excluding movies) among Households, W25-54, A18-49, A25-54 and Total Viewers.** The network also renewed docuseries “Meet the Peetes,” following the lives of Holly Robinson Peete and husband Rodney Peete as they attempt to balance raising four kids, including one with autism, running their HollyRod charity and spending time with Holly’s mother Dolores, who has been living with the Peete family since retiring from her career as a talent manager.

What do you think? Do you watch Good Witch? Are you excited for the new season?

So happy Good Witch was renewed! My husband and I enjoy watching it together. Thanks for a continuation of this saga.

My favorite show. So excited for it it to return.

I love Good Witch wish would be more magical

Absolutely thrilled! How wonderful to see such a good wholesome tv series! I LOVE this show!!

So excited! I love this show! I’ve been a fan since first episode!

Love the series so much!!
Good, clean show
Bought all the movie
Wish there was a big one to compete against
Hocus Pocus
So tired of that one
Keep making seres

I’m so excited for the new season! Good Witch is my favorite show on tv. When I have a bad day at work I come home and this show puts me in a different frame of mind. Middletown and all its enthralling actors, especially Katherine Bell bring a wonderful, enchanting stoy that provides an escape for the mind in this out of control world we live in today. Please keep bringing this show back. Season after season all the many fans will be waiting for more!!

so excited love the show cant wait till next season

Yes, we will deffinetly watch season 5 of the Good Witch! And hopefully many more years to come!!

We love all the series and my family loves all the wonderful movies.