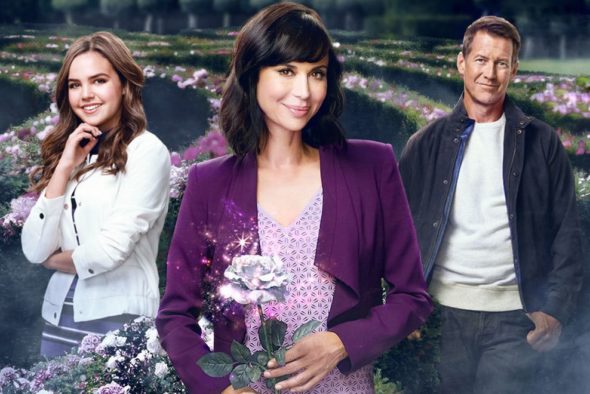 Enchantress Cassie Nightingale will be back to cast even more spells. Hallmark Channel has announced that their Good Witch TV show has been renewed for a fourth season.

The third season, which finished airing early this month, averaged a 0.24 rating in the 18-49 demographic with 2.15 million viewers. That was down slightly when compared to season two. Good Witch is currently Hallmark’s third-highest rated original scripted series (behind Chesapeake Shores and When Calls the Heart).

Here’s the press release about the fourth season renewal:

“Good Witch” Season Three Boosted Network to #1 in Time Period All Season BEVERLY HILLS, CA – July 27, 2017 – In the wake of ratings growth in its third season that concluded July 2, Hallmark Channel has renewed its hit, original primetime series “Good Witch” for season four. Based on the “The Good Witch” movie franchise that is the most successful in the network’s history, the series stars Catherine Bell (“Army Wives,” “JAG”), Bailee Madison (Just Go with It, “Trophy Wife”) and James Denton (“Desperate Housewives,” “Devious Maids”). The announcement was made today as part of Crown Media Family Network’s bi-annual TV Critics Association Summer Press Tour.

“Fans continue to be drawn to the magical world of Middleton and are captivated by the enchanting adventures of Cassie, Sam and Grace,” said Michelle Vicary, Executive Vice President, Programming and Network Publicity, Crown Media Family Networks. “Our loyal viewers have embraced these characters and we’re thrilled to bring them more stories filled with magic, love and adventure in season four.”

Since the third season debut on April 30, “Good Witch” has averaged a 2.6 HH rating and over 2.8 million Total Viewers on a Live+3 basis, making the network the highest-rated and most watched in the time period all season long among HH and Total Viewers.*

Hallmark Channel’s strategy of programming original, primetime series on an increasingly competitive Sunday night has yielded great success. This is the second original series pick-up for Hallmark Channel in recent months, having also confirmed a fifth season for its frontier drama “When Calls the Heart,” which experienced record ratings in its fourth year with double-digit gains in HHs and key demos, year over year.** Hallmark Channel will continue to present original series on Sunday nights this year, with the season two premiere of “Chesapeake Shores” starring Jesse Metcalfe, Meghan Ory, Treat Williams and Diane Ladd on Sunday, August 6 (9pm ET/PT).

What do you think? Are you glad to hear that Good Witch has been renewed for a fourth season? Will you be watching?

Very happy The Good Witch has been renewed I absolutely love the show it is magical. Heres hoping to see it for many more seasons to be renewed.

So happy this show has been renewed!!! With all the junk on TV, plus everything going on in the world right now, it’s great to know I can tune in and “escape” if only for awhile. Plus, the cast is awesome

I’m so excited I can hardly wait!! Just wish there was more episodes in the season I love the show thank you for renewing it

I’m Totally Thrilled that Good Witch will continue.
With all shows with violence, it’s such a treat to watch “Good Witch.” I hope it continues for many more years:)

I’m thrilled there will be a season 4! Do we have an air date yet?
Keep the seasons coming!

Will there be a Good Witch Halloween movie for 2017??

Yay!!! One of the best, if not the best shows on TV. It is a feel good, uplifting show the whole family can enjoy. It promotes good feelings and good values.

I’m so happy it has been renewed, I love Hallmark shows and this one is at the top of my list.

I love this show. It’s a breath of fresh air from some of the other programming on TV. Always a lesson in how to treat others with love and respect.

I could not be happier!!! This is a wonderful series and I would like to see it continue for years and years

So glad it got renewed! I really enjoy this show.

Love the show, am glad it’s been renewed. It will be good to spend another season in Middleton.

Great news for its British Fans. I hope we shall see a Halloween special.