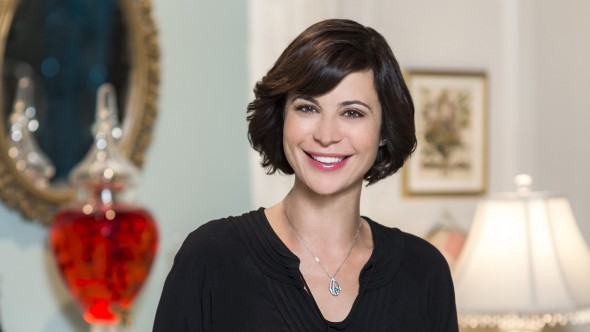 The bewitching will continue. Hallmark Channel has announced that they’ve renewed their Good Witch TV series for a second season of 12 episodes. The two-hour season premiere will air this fall and be followed by 10 hour episodes in 2016.

“Good Witch” has charmed audiences in its first season, becoming the network’s most-watched and highest-rated primetime drama in the time period. The announcement of the renewal comes as “Good Witch” stars Catherine Bell and James Denton make their debut at the Marché International des Programmes de Télévision (MIPTV), the world’s largest TV and digital content market and creative forum, in Cannes, France.

“Our viewers have fallen in love with Catherine Bell and her enchanting journey, as well as her talented co-stars, James Denton and Bailee Madison. After seeing the tremendously overwhelming response to the series, there was no question that ‘Good Witch’ would be renewed for a second season,” said Michelle Vicary, Executive Vice President, Programming and Publicity, Crown Media Family Networks. “I am also delighted to announce that Cassie Nightingale will bring her essence and magical charms this Fall with a special 2-hour presentation as an early treat to our beloved fans,” Vicary concluded.

Though her magic always has us spellbound, Cassie Nightingale (Bell) can never predict what excitement will brew in her life with her enchanting daughter, Grace (Madison) and handsome neighbor, Dr. Sam Radford (Denton). Cassie takes on all the fun and romance of life one day or one spell at a time.

What do you think? Do you like the Good Witch TV show? Do you think it should been renewed or cancelled instead?

All these comments are fake and posted by one obsessed caw-bell fan. The show is embarrassingly bad! Cancel this garbage. Hallmark has to cram down our throats the U G L Y faces of cow-bell & B-mad every dingdong minutes with their hideous banners! UGH ENOUGH!

Magic? Are you drunk?? This show su cks! The movies were good but this lame series needs canceling stat! Not enough usage of the lovable old characters (Martha, Derek, Lori, Grandpa & wife) and too many useless characters portrayed by dull and rather untalented actors who are doing nothing whatsoever but fill up time: Ryan aka Cassie’s boyfriend, Dr Sam, his son, new Brandon, Stephanie etc. Last and least of worthless actors, Grace aka B-Mad, eternally annoying & conceited brat. Abigail is good but is she good or evil? Pick one and stick with it. The picture is way too… Read more »

I love the movies and the series Good Witch but wish the series lasted longer. Please more series shows and new movies. Hallmark is the best on T. V.

I was so excited about a series,but there was nothing being said about the original cast. I watched the two hr show. No magic, no mystery, who are all these characters? Where are all the family and friends of Middleton? Thanke God someone came through with the idea to keep Martha. I wasn’t going to watch any further but I thought, that’s not fair to the show. I watched “The Storm” on Sat nite it was a joke. I also watched each show so far. I have not heard anything good about it from other people so I guess they’re… Read more »

We want more episodes…we are loving it!

Well, I guess I’m happy the show has been renewed. My only question
is where is the magic?? I have watched every episode. I think
the scripts could have more humor and more magical situations.
I do love Catherine Bell and hope her character is more light-
hearted in the second season. Also, give daughter Grace
some funny moments! I can understand the mood of
the characters after losing husband and dad, Jake Russell.

I’m so glad to hear that. I love that show!

Thanks for renewing “Good Witch.” Have enjoyed all the movies and the series carries on in good fashion. Hope it lasts for many seasons.

I LOVE ALL THE “GOOD WITCH” SERIES! SO GLAD IT HAS BEEN RENEWED.

This is another good Saturay Nght show. Glad to seeanother season RENEWED!! OH! Am I the only one that has to wait 3 seconds to type each letter!!!!

This is great news. I love the series and I loved the movies even before that. I liked Catherine Bell with longer hair but I guess you can’t have everything.

So excited to hear that you have renewed the Good Witch series.
Thank nnyou and keep this show going for years to come. It is a great show.
Love all the characters. Good family, fun, and entertaining show.
This is what our country needs…light entertainment…enough of violence and crime,
and horror.
Good job.