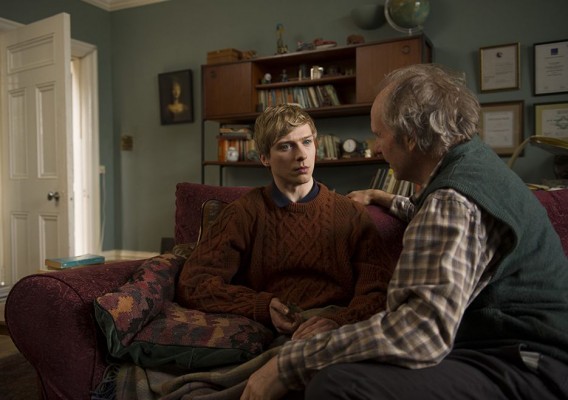 TV show description:
Set in suburban London, this science-fiction drama is set in a parallel present, where the latest must-have gadget for any busy family is a Synthetic (or Synth for short) –- a highly-developed robotic servant, eerily similar to its live counterpart. We see the world through multiple concurrent storylines.

In the hope of transforming the way his family lives, father Joe Hawkins (Tom Goodman-Hill) purchases a Synth named Anita (Gemma Chan) against the wishes of his wife; successful lawyer Laura Hawkins (Katharine Parkinson). Their children are rebellious Mattie (Lucy Carless); Toby (Theo Stevenson), a teen who’s on the brink of manhood; and innocent young Sophie (Pixie Davies). Most of the time, Anita is the pliant, servile automaton that all Synths are supposed to be — but every so often she does something inexplicable.

Dr. George Millican (William Hurt) was once a brilliant scientist — a mechanical engineer on the original Synth project. Since his wife Mary died, George has retreated from the world, save for his out of date caretaker Synth Odi (Will Tudor). George treats this particular Synth more like a son than a piece of machinery, due to Odi’s recall of George’s happiest memories. Unfortunately, the aging Odi’s body and mind have been failing, not unlike George’s.

Vera (Rebecca Front) is a Vidman VA-262 and has been designed as a live-in caretaker for elderly people. Vera has been assigned to George as a compulsory upgrade. She has a stern, domineering presence in his home, unlike Odi.

Leo (Colin Morgan) is a desperate man with a singular goal — he wants to be reunited with his beloved family. On the run and hunted by mysterious forces, Leo has little to lose and it shows. His tough exterior masks a dry intellect and humor, and a deep soft spot for his Synth companion Max.

Max (Ivanno Jeremiah) is wide-eyed, curious, and above all, loyal — unlike all of his millions of unthinking brothers and sisters in operation around the world. To Leo, he fulfills multiple roles — sidekick, confidant, little brother, protector and conscience. He sees no bad in anyone or anything, approaching everyone and everything with the trusting optimism of a child.

A gifted but deeply unambitious cop, Detective Sergeant Pete Drummond (Neil Maskell) transferred to the Special Technologies Task Force (the small police unit that deals with the tiny amount of Synth-related crime) for a quiet life, saner hours and to spend some time on his marriage. He thought he’d left the sordid world of human crime behind, but instead, he found himself on the weird fringes of a changing society — witnessing first-hand the darkest aspects of how Synths are transforming our lives for the worse, in his eyes at least. He’s grown angry, bitter and cynical. It doesn’t help he’s a Synth at home helping his wife Jill recuperate from a car accident. He’s starting to think Jill likes her “Simon” more than him.

A natural detective, Detective Inspector Karen Voss (Ruth Bradley) is dedicated to the job at the expense of all else — relationships, friends, and family. She’s a loner but is upbeat, enjoys the work and is always ready with a sardonic grin and a joke. She and Pete work well together and have grown close (she delights in teasing her grumpy partner), but they differ crucially on the “Synth question.” For her, it’s not about loving or hating them; it’s a simple matter of adapting.

Niska (Emily Berrington) works as a prostitute in a legal Synthetic brothel, just one of the millions of registered Synthetic sex workers who do anything you want, don’t need payment, and never even need to leave their room. But Niska exhibits behaviors that mark her out as a little different to her empty-headed co-workers.

Professor Edwin Hobb (Danny Webb) was second only to David Elster (the creator of the Synths) in the field of artificial intelligence. The two worked together closely on the prototypes of the very first Synths – and Hobb was devoted to his brilliant, reclusive mentor. But something went wrong between them and they went their separate ways. Hobb has spent the intervening years building a formidable powerbase, all to prove his path was the right one.

What do you think? Do you like the Humans TV show? Do you think it should have been cancelled or renewed for a fourth season?

This is a new type show and a thriller, it should not be cancelled, I think the ratings are misleading there are more people watching than what it shows

I love this show. I was hooked after the first episode. I was waiting to watch it and am so sad it wont be returning. I want to know the rest of the story. It is so unfair to us, the viewers to leave us hanging like this. It makes me want boycott network shows entirely and only stream shows that have a true series finale with a true ending. It goes without saying the we invested our time and energy for the introduction, and the body of the story, give us the darn conclusion! …um…please

I agree with all the commenters. Just finished watching season 3 and loved this season the most. Can’t believe the show got cancelled just when it was getting so interesting. Please Amazon, Hulu or Netflix pick this series up and develop season 4 and beyond. It’s a winner!

My family just discovered this show in August of 2019, loved this series. It definitely Should be renewed for at least a 4th season!

RENEW!!! Now with Prime Amazon, more people are going to watch the series and be left wondering. Excellent !!! RENEW!!!

Humans is athinking persons story. Pure and interesting entertainment. Never shouldve been cancelled. There are other series deserving to end than this one. Give the people what they want. Keep the story going!

Oh well, just discovered no books. This was an amazing series. I too wish they would at least do us the honor of tying up loose ends. What a waste of all around great talent…

Renew. One of the best (and relevant) tv shows to date.

It should have been renewed.

would love to see another series. far better than westworld. and for me on par with game of thrones

Yes, I completely agree with you. One of the best I’ve seen for a long while.

I hope this show is renewed. There is much more to the story after the end of Season 3, and I have really enjoyed the great acting and screenplay writing of this show much more than many other shows.

Please keep this show – excellent characters and excellent science fiction. Wife and I are huge fans! Sad about Mia – loved her character. Glad Odi is back!

For god sakes keep it, I hate the shows on these days. I have only 2 shows left that I watch now that big bang theory will be gone.

I just watched season 3. This show is absolutely phenomenal. and it is so allegorical, and topical for our times. i.e., the synths could be and allegory for say gay rights. I wish AMC/BBC would get off the damn fence, and either say it is officially canceled, or give us another incredible season. This is NOT fair!

Money spoke and they cancelled it. I tried to petition with Change.org, but they wanted my money too and access to my contacts, so I gave up on that approach. Netflix has picked up other shows from strong fan efforts to accomplish that. I think this show far more interesting than GoT and Lucifer which I also liked a lot, but it’s more along the lines of my all time favorite, BSG Re-imagined.