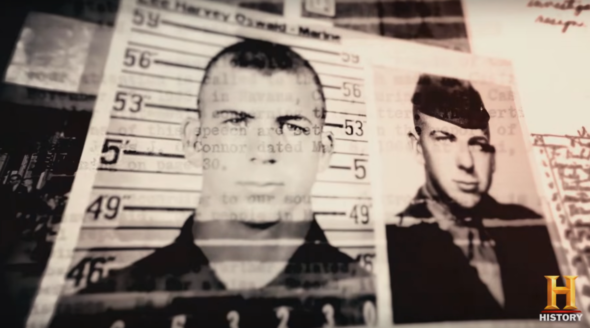 NEW YORK, NY – April 17, 2017 – More than two million declassified government files offer new evidence about Lee Harvey Oswald’s activities in the weeks, months and years before the assassination of President John F. Kennedy with the last remaining documents scheduled for release later this year. HISTORY’s new six-part nonfiction series “JFK Declassified: Tracking Oswald” follows former CIA agent, Bob Baer and former LAPD police lieutenant, Adam Bercovici, on their independent global investigation into Oswald, and the murder of JFK, asking the questions: did he have accomplices, and if so, who helped him assassinate the President? “JFK Declassified: Tracking Oswald” premieres Tuesday, April 25 at 10PM ET/PT and concludes on Tuesday, May 30 at 10PM ET/PT, the week of what would have been JFK’s 100th birthday.

Working alongside elite investigative experts and utilizing state-of-the-art analysis algorithms to examine these top secret files, Baer and his team travel to Moscow, Mexico City, New Orleans, Miami and Dallas to track down every lead and retrace Oswald’s steps with the goal of separating conspiracy theory from the truth. While on the ground in Mexico, the team discovers new clues that suggest a deeper connection between Oswald and the Soviet KGB. Declassified documents reveal that Oswald met with the Cold War enemies of the United States, both Russia and Cuba, only eight weeks before JFK’s assassination.

Following evidence from these declassified files, Baer’s investigation tracks down a former KGB agent and other eyewitnesses who, for the first time on camera, speak about personally meeting with Oswald only weeks before he changed the course of American history. Among the most compelling evidence are police documents that connect Oswald to a suspected “safe house” in Dallas where he could have hidden after the assassination. Will Baer and his team be able to prove their groundbreaking theory and finally establish what drove Lee Harvey Oswald to kill President John F. Kennedy?

What do you think? Do you watch History? Will you check out JFK Declassified: Tracking Oswald?

It is available in Vancouver Canada on demand at ..History/series. All 6 shows are there

Why film the episodes if you are not going to air them in the US, only Canada. This is ridiculous is someone afraid of the truth (CIA)?

Are the called the same name when aired in Canada? I can’t even find new episodes on any torrent service. Are you sure?

I see that additional episodes are airing in Canada.

Where are you seeing that, please?

We were very interested in this and then it was never in aain? What happened?

Yes, we started watching Bob Baer’s program on following Oswald, but the last two weeks all we can get is forged in steel!!! What, did Charter Communications do, change things so we couldn’t get it? Such a shame, we were so hooked on watching that program. Would like to see the last 4 episodes!

If anyone finds this page, POST and thumb every post on here. other people will find it and do the same.

wow so, here is the first time I found a place where anyone was talking about the VANISHED series! what the hell? It was actually going in an “unorthodox” way in that it was assuming nothing and actually examining the subject matter. it cannot be this obvious the show was “pulled the plug” I mean, I have emailed that stupid bot email for the show and it’s an android. I can’t say how depressed I am if this series gets killed. If we cannot talk about all this IN TRUTH all these years later, are they just waiting for everyone… Read more »

Hi
I have the original “Men Who Killed Kennedy” on VHS Taped when it was new.
I’ve been obsessed with the Kennedy assassination since it happened. I’ve read all the books, etc. I can offer one piece of advice. The absolute BEST and DEFINITIVE book on the assassination is entitled “JFK and the Unspeakable: Why he died and why it matters” by James W. Douglass. I think it should be required for current generation.

Sorry. The book, “The End of Camelot” which you will NEVER be able to locate a copy of is the absolute BEST book on the assassination of JFK. This book is handed person-to-person and readers are allowed to write comments, place post-it notes etc…for each subsequent reader.

The series was intriguing; unsettling that it was canceled. Makes you wonder why we’ll never know the facts.

Pretty sure those “in charge” shut it down. If you’ve got an ex- CIA operative running scared, it’s for a good reason.

I dont think anyone ran away. The series was filmed. Just unaired.

Thanks to everyone who are talking about this!!!!! I felt alone in wondering what happened

I believe you’re correct! I smell a rat!

I HAVE been watching it, and it just DISAPPEARED!!!! They took it off the schedule with NO explanation. Maybe they just got too close.

I know rite! I’ve spent all nigjt last night and all day today tring to find out info on whats going on. The conspiracy continues!!

Our government realized the investigation was getting too close to what really happened, and whomever didn’t want any of that information released, had it halted. I looked forward to seeing the next segment. Now it just disappeared?? Maybe they now silenced the former CIA investigator because he knows too much?

“our government” I no longer accept that phrase. The series was made. It just is unaired. I dont think T-rump was watching the show and then phoned in a commandment to halt it to his friend at the history channel.

After years of study. I am convinced there is some kind of PERSONAL vendetta (that’s not the right word) or DIRECTIVE that the false truth of Lee Oswald be perpetuated as being even involved in the murder. I have no idea what it is.

Maybe the Kennedy family didn’t want the show to air. I remember that some reports were sealed for 50 years. Perhaps the family filed an injunction to stop the show from airing or to have the documents remained sealed. Guess we’ll never know!

Was Bob Baer truly a CIA officer? If so, which Directorate did he work in? What was his actual job? Was he an analyst? Did he perform clandestine work?

I think I know who is resonsable for the killing of J. F. K.

In case you guys missed it. They are trying to uncover whether Cuba had something to do with the assassination. That is un heard of and definitely new evidence. His investigation is going in the right direction and is uncovering things that have been hidden for decades.

Look at the Zapruter film JFk’s head moves right to left that is the physics proof that there was a shot from elsewhere then the back.

Ran:
Watch the Z film frame by frame, and it is clear that Kennedys head moves forward just after beeing hit, then backwards (frame 312 amd 313)

You are absolutely right . Not only that but you can also see brain and skin and blood fly Forward !! Now that shows he was hit from behind . This is so obvious that I cannot understand there is any need for dialog on it .

No sir. The wound sustained to JFK’s head is consistent with only that of a shot from the back. Period. That is all the evidence you need. And if you wanna get really technical; if you watch the film very closely, when his head is struck by the bullet the flap of skin clearly goes forward and over his face. consistent with a bullet wound to the back

It sounds really stupid but I’ve been studying this stuff for years and I am convinced the head shot came from the storm drain. If you actually stand at the spot, you can envision it very clearly that it was not only possible but likely, with a viable escape route.

Loses something when you spell Zapruder wrong

The same loony toons who brought us Hunting Hitler. the first episode was all about a visit by Oswaltd to the Soviet Embassy in Mexico City. Unfortunately that is not new and has been known about. Seems like an excuse to go jetting around the world. Absolutely nothing new except flights of fancy from these guys.

I was in the Navy. I was in New Orleans for the weekend visiting family. I left to return to Mayport, Fl. I picked up a hitch-hiker. His name was Oswald.

What else ? What did you talk about ? Was it lee Harvey Oswald? It is a shame the conspiracy series was cancelled. They did an outstanding job of hunting hitler !!! Buddy Smith