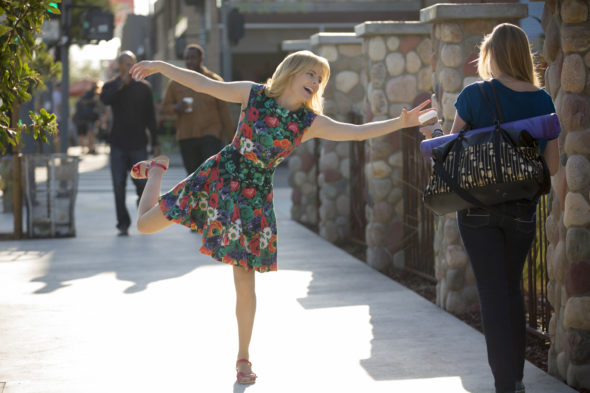 TV show description:
A comedy from creators Pam Brady and Mitch Hurwitz, the Lady Dynamite TV show is loosely inspired by the experiences of star Maria Bamford. Netflix describes it as, “…the story of a woman who loses — and then finds — her s**t.” Set in Los Angeles, the sitcom is a sometimes surreal look at several different periods in the actor and standup comic’s life.

Even as she is making strides forward, Maria contemplates her recent mental breakdown. During those dark days, she ended up back in Duluth, Minnesota at the home of her parents, Marilyn and Joel (Place and Begley). Now, she considers whether her ambitions are at odds with a happy life.

Maria takes great pains not to be judgmental, but this approach sometimes leads her to making choices that are foolhardy. She values loyalty highly enough that she sometimes allows friends to take advantage of her.

Maria can be inclined to flights of fancy. For example, in her imagination, she features as the star of in a commercial for an upscale shampoo.

Bruce Ben-Bacharach (Melamed) has long been Maria’s manager. While he is usually adjacent to the big time, he never quite manages to grasp the brass ring. Although Bruce’s clients typically leave him as soon as they realize success, he and Maria are committed to sticking it out, together.

Rounding out Maria’s circle are her competitive sister, Susan (Collins), and her best friends, Dagmar (Everett) and Larissa (Parham).

Series Finale:
Episode #20 — “Little Manila”
When the plans for Maria’s second wedding hit a snag, her new friends in the Filipino community step in to throw her an unforgettable party. (Courtesy of Netflix)
First aired: November 10, 2017

What do you think? Do you like the Lady Dynamite TV series? Did it end at the right time? Should Netflix have cancelled or renewed this TV show for season three?