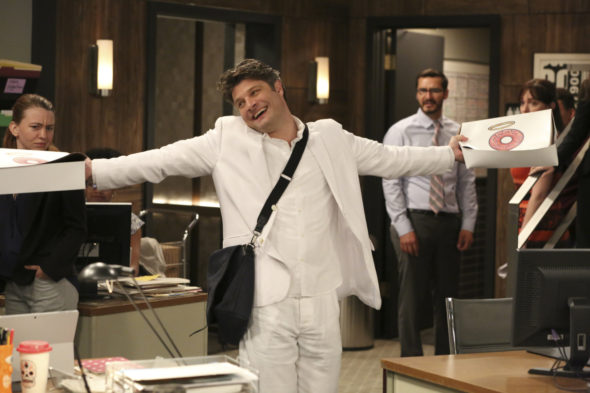 Living Biblically is off to meet its maker. Deadline reports CBS has cancelled the new TV show after eight episodes.

Living Biblically premiered in February, and things have not been going well for the freshman comedy. So far, the show is averaging a .70 rating in the 18-49 demo and only 4.208 million viewers, making it CBS’ lowest-rated new series.

CBS has pulled Living Biblically from the schedule effective immediately.

What do you think? Have you seen Living Biblically? Do you think it should’ve been renewed?

I am very happy that this show is cancelled. I am a minister’s wife, and I believe this show does not depict true Christianity. The Bible is taken way out of context and the characters are not a reflection of “Living Biblically” in any way whatsoever. In fact, the characters made light of and mocked the Bible. I’ve been praying daily that GOD would bring this show down. After all, should GOD be represented by a sitcom? We are to treat holy matters with reverence, and not in a light way. This is called taking GOD’S name in vain. What… Read more »

I really, really like the show. A good change from the trash on tv today. They would be smart to bring it back.

I think that they should have left it alone. While not hysterically funny, it was a cute show and a change from the rest of the crap. Something the family can watch.

I liked Living Biblically! Sorry to hear it was canceled. It was a refreshing change from the other garbage on TV these days.

Why does CBS continually cancel good wholesome shows while the degradation of humanity continues? This was a well written and funny show! Not many good funny shows on anymore. Television just isn’t what it use to be. UGH!

Why does CBS continually cancel good wholesome shows while the degradation of humanity continues? It was well written and funny! Not many funny shows on anymore. Television just isn’t what it use to be. Ugh!

This was the one network show trying to uphold some kind of moral values on television. While shows like Scandal and Lucifer feed into the hate and degredation of our society, it was refreshing to finally see a show present an alternative perspective of human decency and respectability.

CBS really shows where it stands by cancelling it.
#mainstreamtrash

Really enjoyed this show. Bummed it wasn’t renewed. Really hope someone picks it up to continue making it. We need more shows like this.

We really enjoyed it. We were hoping that it would continue.

I am also disappointed. It’s a good show! Unfortunately, Hollywood doesn’t seem to like when anyone follows God. The show was fun, well written, a solid cast and delivered positive messages at the end. Try it again. You dumped Seinfeld the first go-round also. Rebooted and boom… a Hit!

I can’t believe CBS cancelled one of the funniest shows on TV. I was upset when they cancelled Me, Myself and I. Now I’m ticked off. I am officially boycotting CBS.

I am disappointed! I thought this was very cleverly written and performed. CBS failed all that worked on this show. Not much promotion.

I’m really very surprised that Living Biblically has been canceled. I really enjoyed that show and I’m in the middle of your prime demographic.

I really liked the show & am very disappointed it is being cancelled.

I enjoyed the show. It should have been given a little more time. It was refreshing to see religious characters portrayed as normal people for a change. I was disappointed in some of the acting by relatively good actors. Camryn Manheim, Lindsey Kraft and Sara Gilbert’s characters all seemed over the top. If I didn’t know them from other shows, I would think they were really bad actors.