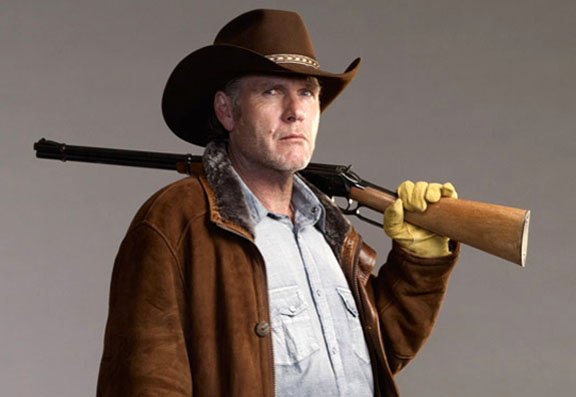 A&E has cancelled Longmire after three seasons. The cable channel issued a statement that said, “We would like to thank the phenomenal cast, crew and producers of Longmire, along with our partners at Warner Horizon, for their tireless work on three seasons of quality dramatic storytelling.”

Word is that Warner Horizon plans to shop the series to other outlets so a fourth season may still happen.

What do you think? Do you like Longmire? Do you think it should be cancelled or renewed for a fourth season instead?

Love Longmire on Netflix. Please give me more!!!!

I have loved this series and I’m really sorry it is now cancelled. That being said, I really hope to see some of my favorite actors from this series in other television/movie productions soon. (Robert Taylor, who is an amazing actor, I’ve really loved him in this series. Zahn McClarnon and Lou Diamond Phillips both wonderful!

If you have Netflix you can continue to watch and enjoy Longmire! We are now watching Season 6..!!!!

Seasons 4&5 are on Netflix. Season 6 will be coming on Netflix in November. Check website.

You can watch Season 4 & 5 on Netflix. Season 6 will be showing on Netflix in November. Check the website for the date.

Would love to see this series continue. Such excellent writing and acting. Can’t leave Henry out in the desert like that.

Hope they DO NOT Cancel on TV

So does anyone know who has picked up the Longmire saga? Or are they even still filming it?

Replying to my own comment!! Just pulled up the Longmire info online. Season 5 was on Netflix, we watched it ourselves. It made its debut on Sept 23,2016. The new info shows that Netflix will be airing season 6 around the same time this year, in Sept 2017. It may not have as many episodes but should have an ending. So stick with Netflix till the end of the year at least!!

I heard Netflix, hope not cuz I don’t get that

Netflix picked it up but they only did 2 more seasons and its now over. They should still be showing it on Netflix tho

Call Netflix and complain. The show had a fairly wide following and many of its fans feel the same way. We really enjoyed the show and looked forward to each new season.

With so much really bad entertainment on TV, Longmire was a Oasis in a Sea of trash. Bring it back !