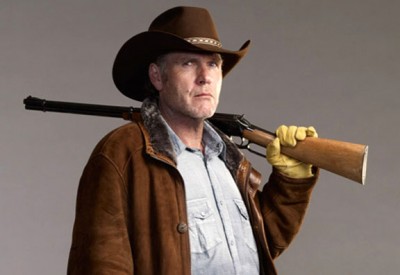 It was a big night for several cable dramas last night. In addition to AMC’s Breaking Bad having it’s most-watched episode, Longmire and The Glades both hit season highs on A&E.

Here’s the cable channel’s press release about the ratings:

NEW YORK, NY – July 16, 2012 – A&E’s new original scripted drama series “Longmire” was watched by a record 4.5 million total viewers on Sunday, July 15 at 10:00PM ET/PT. This marked the most-watched premiere episode for the freshman series in its seventh week, against increased competition in the scripted landscape. “Longmire” grew by 10% over the previous week’s 4.1 million viewers.

The seventh episode of season three of “The Glades” at 9:00PM ET/PT was watched by a season best 3.4 million viewers, up 6% from 3.2 million last week.

What do you think? Werte you watching either of these shows last night? Does it surprise you that they’re doing well?

I am still angry that the glades was cancelled. Now ur trying to cancel Longmire. What is wrong with h people. The only really good shows that have been on v in years and u want to cancel them. What are u thinking. Do u not like having anot one but two hit shows. Get real u dim wits. Put these two shoes back on tv.

When does this season start

I do not read books, but watch a lot of series on TV. Love Longmire. The Glades was good for a while but that romance between him and the doctor just didn’t fit in. A&E puts out some very good series. Keep up the good work!

love the Longmire series, have read all of the books…Really liked the first couple of seasns of The Glades but something happened to the last one, just didnt seem like the original feeling in the writing or cast interaction. it was like they were just walking through reading their lines off of posterboard.

ADMIN. I owe you an apology. Seems the article the poster was referring to was an old one but just published. i found it by a quote from the article. matt gives an early description of the show and i believe the back foot comment was about Callie. My apologies. i really find your message board and 1 other to be the best. THX

It didn’t seem to be about the show’s future. As I wrote it was vague and seemed to be some personal comments. No real details, so perhaps i shouldn’t take it too seriously. THX for taking time to answer.

Question for ADMIN. This am , on another message board, fans were discussing an interview given by Matt Passmore. Some quoted him a few times. They were vague and somewhat mysterious. No info on how to find it. Anyone know. THX

Dory » Regarding what? The show’s future?

Sorry seems I posted in the wrong area, It was described as a lengthy article. Not wanting to quote out of context. One statement he made was he met someone who knocks him on his back foot. if this is personal who cares. If its about the show i am interested.