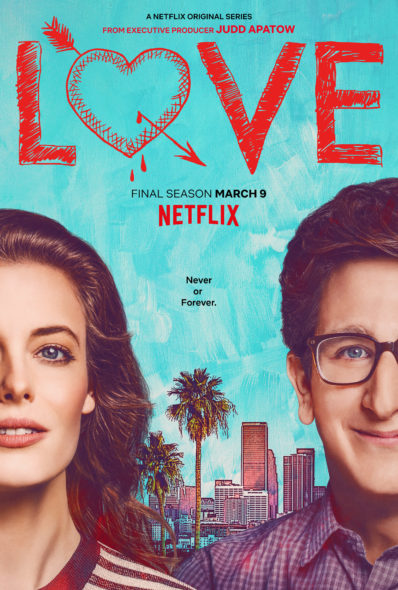 Does true love conquer all during the third and final season of the Love TV show on Netflix? Usually, the Nielsen ratings play a big role in determining whether a TV show like Love is cancelled or renewed for season four. Netflix and other streaming platforms, however, collect their own data. Still, many viewers are frustrated their opinions weren’t considered, before Netflix ended Love with its third season. If you’ve been watching this TV series, we’d love to know how you feel about the Love season three episodes. We invite you to rate them for us here.

A Netflix romantic comedy-drama, Love stars Gillian Jacobs, Paul Rust, and Claudia O’Doherty. Unfolding in Los Angeles, this TV series takes an honest look at modern relationships, through the experiences of Gus (Rust) and Mickey (Jacobs). The third season kicks off with the pair in a committed relationship. Together, they have to navigate all the ups and downs, because this is only the beginning.

What do you think? Which season three episodes of the Love TV series do you rate as wonderful, terrible, or somewhere between? Should Netflix have cancelled or renewed Love for a fourth season? Don’t forget to vote, and share your thoughts, below.