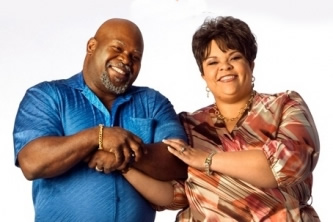 TV show description:
This sitcom was created by Tyler Perry and is modeled after his film and play of the same name. It centers around a family that runs a home for senior citizens in Atlanta, Georgia.

Mr. Brown’s father passes away and leaves him his house, along with a note that says, “Take care of the old…” Thinking that he means the elderly, Mr. Brown opens up a home for seniors, Brown Meadows. He later finds the rest of the note that indicates his father really meant to take care of the Thunderbird in the garage.

Mr. Brown, (David Mann) is a church deacon in his 60s and is proud to have been saved. He’s known for being caring and giving, and for dressing outrageously. He was married at one time, but his wife passed away. He just recently found out that he has a daughter, Cora, from a one night stand on prom night with Mabel “Madea” Simmons (Tyler Perry in the movie). Cora (Tamela Mann) is a deeply religious woman and is active in her church. Despite this, if you cross her, you’ll quickly learn she is outspoken Madea’s daughter.

Will (Lamman Rucker) is Mr. Brown’s nephew and a doctor. He loves his uncle to the point that he helps out at the home, giving free medical services to the seniors. His wife, Sasha (Denise Boutte), is a nurse who also gives of her time at the home. Still, she’s ready for more in her life and wants to get started on a family.

Jesus Hernandez (Antonio Jaramillo) is the handyman at Brown Meadows, earning money to pay his tuition for law school. London Sheraton (Arielle Vandenberg) is a privileged Paris Hilton-like celebrity and appears to do nothing. She’s at the home doing community service for several DUIs.

Edna Barnes (Juanita Jennings) is one of the residents at Brown Meadows, and although she’s in her late 60s, she acts as if it’s the new 40. She’s known to have a voice of gold and always wanted to be a singer but never pursued it. She’s a widow and all of her close friends and family have passed away as well.

Her fellow resident, Colonel Cleophus Jackson (Tony Vaughn) lives in the past. He was in the military and still lives by the motto of, “Shoot now, ask questions later.” He’s formal and disciplined, yet has a soft heart beneath it all. He’s a widower and is estranged from his only child.

Daisy LaRue (K Callan) is a former B-movie actress who misses her heyday. She still has lots of money from her career, but never spends it and refuses to talk about it. Never married, she dated some real movers and shakers.

Series Finale:
Episode 140 — Meet the Family Portrait
Mr. Brown wants to have a family portrait taken but the rest of the family doesn’t and a series of conflict prevents it from happening. Elsewhere, there talks about funeral arrangements.
First aired: November 18, 2011.

My family and I have just watched another wonderful Tyler Perry movie. We absolutely love his movies and TV shows. We like the rest, really miss Tyler Perry’s Meet The Browns. Truly a funny show for the whole family.

I don’t see why

We need more of meet the Browns come on Tyler Perry and own network give them the green light because i miss that show thanks and God bless. ☺

We need more of meet the Browns come on Tyler Perry and own network given them the green light because i miss that show thanks and God bless. ☺

I really miss the browns. We are saturated with reruns of the paynes ,why not at least have the browns on reruns?

Please bring meet the browns back on. It is a wonderful comedy show. Please negotiate with TYLER PERRY thanks

WHY WHY I CAN’T UNDER STANDING WHY THEY ARE TAKING A TRULY FUNNY S HOW OFF THE AIR. IT HAS TRULY BEEN AN ENJOYMENT FOR ME AND MY WHOLE FAMILY. MAKING US LAUGH AT THE FUNNY EPISODES OF THE BROWN CLAN. THE NEW WORKS LEAVE JUNE ON THE AIR. THERE IS NOT!!! ANY THINGS WORTH WATCHING NOW I GUESS WE WILL READY A BOOK AND SCRATCH TV. THANKS TO THE STATE ON THE BROWN FOR MAKING US LAUGH. WE WILL TRULY MISS YOU. MAYBE THE NEW WORKS WILL COME TO THE I SENT ESPN AND RENEW YOU.

It was not funny at all.poor writing and worse acting to say the least!