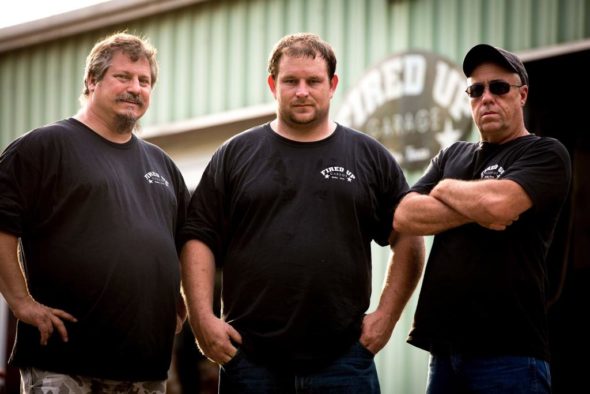 Misfit Garage is back. Recently, Discovery Channel announced season six will premiere in May.

The series “follows the crew at Fired Up Garage – Thomas Weeks, Tom Smith, John Klump and Josh Paris – as they set out to prove themselves as the top shop in Texas for custom street rods.”

Season six of Misfit Garage premieres on Discovery Channel on May 2nd at 9 p.m. ET/PT.

The oddball crew at Fired Up Garage shifts into high gear for an all-new season of MISFIT GARAGE, returning to Discovery Channel on Wednesday, May 2nd at 9PM ET/PT. The FAST N’ LOUD spin-off series is back with brand-new episodes, and the misfits are ready to change the game. This season the team takes on their most ambitious build yet in hopes of improving their reputation, but with their usual antics and a team member’s departure, the crew at Fired Up Garage must put everything on the line for success.

MISFIT GARAGE follows the crew at Fired Up Garage – Thomas Weeks, Tom Smith, John Klump and Josh Paris – as they set out to prove themselves as the top shop in Texas for custom street rods. That’s an arduous task for the misfits as they’re down man power after a crew member’s abrupt departure. Will the remaining team at Fired Up Garage bring their A-game to become the leading custom street rod shop in Texas, or will they crumble under pressure?

This season, the misfits aim to build their best cars yet and take on the ambitious task of creating a custom 1978 Chevy K5 Blazer that cost Thomas a pretty penny. With the pressure on to recoup the expense, the misfits plan to showcase the Blazer at a car show in Texas, but Richard Rawlings stops by Fired Up Garage and throws a Gas Monkey wrench in their plans. Not letting anyone or anything get in their way, the misfits buckle up and get down to business, vowing to turn a profit and build cars that are bigger and badder than ever.

What do you think? Have you seen Misfit Garage? Will you watch the new season?

Just the sort of blokes you’d want to have a pint with in the local Pub’. As said, Tom is a natural comedian but they all bounce off each other very well. Hope to see many more episodes in the future.

I’m in the UK and have totally enjoyed Misfit Garage. Watched every episode so far on Now TV and am waiting for it to return here. As said, Tom is a natural comedian, but they all bounce off each other really well. The sort of blokes you’d like to have a pint with in the pub!

Yes my husband and his son love them

What happened to Misfit garage? I have it set on my DVR and noticed it is missing the next 2 weeks. Did I miss last week was the season finale? I love the show please tell me it isn’t finished. I live 16 miles south east of Detroit and cars are in my blood, lol. Brad

The best show on tv today. Really enjoy everything about every episode. Would like to visit them one day

This show is great! Funny and cool watching them put awesome cars together. Definitely recommend. Big Tom is the highlight of the show!

Thanks for watching ! And thank you for the complement

Do watch the show,funny,very mechanically informative,and Tom is good at buying muscle cars.Will keep on watching