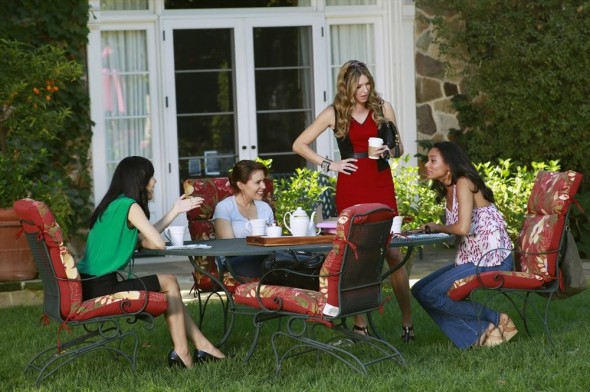 Despite another season of low ratings, zABC has renewed their Mistresses TV show for a third season. The 13 new episodes are expected to air next summer.

Based on a British series of the same name, Mistresses revolves around the lives and loves of four sexy female friends. Performers include Alyssa Milano, Rochelle Aytes, Yunjin Kim, Jes Macallan, Jason George, and Brett Tucker.

The second season averaged a 1.0 rating in the 18-49 demographic with 3.71 million viewers. That was down year-to-year by about 16% in the demo but was even in viewership.

UPDATE: Though Mistresses will return for season three, Alyssa Milano will not. The actress says, “After two wonderful seasons in Los Angeles, the studio has decided to shoot Season 3 of Mistresses in Vancouver, Canada for financial reasons. It’s with a heavy heart that I have decided that I can’t relocate. I have two babies under 4. Being a mother and wife comes first, and I just can not uproot my children and separate the family by moving away. I will miss this job desperately and wish everyone the absolute best.” It’s unclear how her departure will be handled.

What do you think? Are you glad to hear that Mistresses has been renewed? Will you miss Milano? How long should this series run?

I love the show and all the actors are great, hope it comes back

Im so happy that it is coming back on but upset that Alyssa isn’t.

Yes I’m glad the show is renewed. And yes of course, I will miss Alyssa. I love her and have loved her since WHO’s the Boss?

Although I’m peeved abt Jocelyn (I’m thinking her name is?) getting with Harry. Or the girl (Alyssa played as her sister-cant remember her name now..Lol)..

But all in the same, I’m glad its coming back! Cheers!

I am so glad it is coming back for a 3rd season. It is a bit crazy that the ratings are so low, I love it. Sad that Alyssa won’t be in the next season…. but being a mom, I truly understand.

I’m not sure if this show will last without Savi and Harry/Dom saga, might as well cancel. Too bad that they have to move the show.

So happy it will be coming back on…. I miss it. Perhaps they can replace Allyssa. Was never sure if I really liked her acting in it anyway.

Thrilled to hear that this show will air a 3rd season. I will most definitely miss Alyssa Milano…she is a WONDERFUL actress and the producers should not have moved the tapings…that is too bad.

That is it for that show. It only got past the first TV season because of her fans and the dom/savi/harry triangle. The rest of the storylines are as thin as tissue paper.

This show will be trash without Alyssa. So sad!! They might as well have cancelled it, me and my roommates always tuned in for her. She really was the heart of the show! *heart breaks*

Does anyone know of a different show that’s kind of like this? We like the summer-y soaps, but none of us can stand 2 of the other actresses without having Alyssa to ground them. Ppl have said Devious Maids is pretty good? I dunno, I’d gladly take suggestions in case anyone knows! I figure it’s a similar audience 🙂

No more Alyssa??? Well, there goes my reason to watch season 3. Was so looking forward to a confrontation between her and Joss. Alyssa was the heart of the show. It will be amazing now if they even keep season 3 on the air more than 2 episodes without her on it. What a shame!!!!!!!!!!!!!!!!!

I’m ecstatic that Mistresses has been renewed for season 3. They left too many “what if ” scenarios at the end of the last season. It will be different without Alyssa but the other characters are all strong actors and play off one another well. I’m sure Alyssa will be written out by the discovery of her sister Josslyn and ex hubby Harry together on the beach.

I am glad that there would be a season 3 for the show. But don’t agree that the show will relocate to Vancouver on the reason for financial reasons considering California just passed an initiative to fight runaway productions. The producers should keep it in California.

It won’t be the same without Alyssa but totally understand her decision as family should always be the priority! Good for her

My favorite show! I live it. This is my downtime with the girls!

I LOVED, LOVED this show. I am soooooooo happy that there will be a season 3. I did not like the ending of season two. What was Joss thinking. She has it all with that sweet, good looking hunk of a guy who has everything any girl would want. I really hate it that Savi is not returning. I cannot wait til next season.