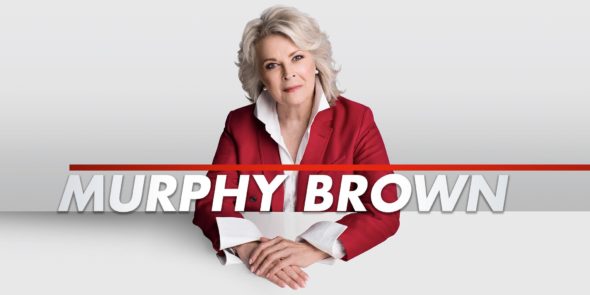 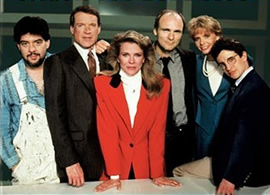 The only consistent man in Murphy’s life is her philosophical house painter, Eldin Bernecky (Robert Pastorelli). He ends up moving on, as does Miles. The latter is replaced by uptight Kay Carter-Shepley (Lily Tomlin).

In the 2018 Murphy Brown TV series revival, a retired Murphy, bristling at fake news (and charges thereof), returns to the airwaves, but not on FYI. Now, she’s hosting CNC cable network’s new morning news program, Murphy in the Morning. She recruits Corky, Frank, and Miles, from her old FYI team. They’re also joined by social media director Pat Patel (Nik Dodani), who has to draw Murphy and the team into the 21st century.

The team still decompresses at Phil’s Bar, now run by his sister, Phyllis (Tyne Daly). Now that she is back in the game, Murphy resolves to draw the line between sensationalistic television and honest reporting, which is what the world truly needs.

Series Finale:
Episode #246 and #247 — Never Can Say Goodbye, parts one and two
Murphy plans on leaving FYI and fires her last assistant, snooty Secretary #93 (Bette Midler). It’s been six months since Murphy’s last chemotherapy treatment and she wants to enjoy the rest of her life.The rest of the staff tries to come to grips with the idea of Murphy leaving and Jim wonders if it might be time for him leave as well. He seeks career advice from Mike Wallace who tells him that he’s boring and has lost his spark.Shooting on location down the street, Julia Roberts stops by the offices of FYI hoping to meet her favorite reporter, Frank Fontana. They eventually meet and arrange a date.Murphy has another mammogram, expecting to get a clean bill of health but the scan shows something that will require exploratory surgery. At the bar, Murphy anguishes over the news and reflects on her need to talk to Phil for guidance. Shockingly, the deceased barkeeper actually shows up. It seems he knew too much about Whitewater so his death was faked and he was put him into hiding. Unfortunately he still knows too much for his own good and gets whisked away again.Later, Murphy goes under the knife as her co-workers wait outside. While asleep, she has an out of body experience and visits heaven to talk to the only notable person she hasn’t interviewed yet, God (Alan King). He tells her she must make the best of the gifts she’s been given. She wakes up and learns that it was just a cyst and will be fine.Her friends are happy for Murphy but are unsure about how to adapt without Murphy as a part of FYI. Jim prepares to leave and Murphy returns to the office. She’s ready to tell everyone that she’s changed her mind, when they all mention what they have in the works for their own careers. Murphy confesses her selfishness and says that she doesn’t want to leave. After a group hug, they all get together to reminisce about memories of the past.At the end of the day, Murphy returns to her townhouse. Her good friend and former house painter, Eldin has returned following a call from young Avery (Haley Joel Osment), who used his mother’s Sprint card to track him down. Eldin proposes marriage to Murphy, but instead she offers him the opportunity to give the place a touch-up.
First aired: May 18, 1998.
Revival Series Finale:
Episode #260 — Happy New Year
The gang tries to distract Murphy from worrying about Avery’s assignment in Kabul by getting her to attend the special 100th anniversary New Year’s Eve celebration at Phil’s Bar, on the season finale (which was not written as a series finale). Charles Kimbrough returns as Jim Dial. MSNBC anchor and host Lawrence O’Donnell and NBC News chief foreign affairs correspondent and MSNBC host Andrea Mitchell guest star as themselves. The episode was directed by Barnet Kellman, who directed 76 episodes of the original series, including its pilot and the second half of the two-part finale for the show’s initial 10-year run.
First aired: December 20, 2018.

Please keep it going. I already miss it

Keep it going I enjoy it.

Bring Back Murphy Brown loved it originally and loved this “new” one
Bring them back!!

So much fun to see this wonderful show again!! Keep it going!

We’re enjoying the revival – great to hear “honest reporting” – and the sweet doggie with wheels is a great addition to the cast!

I enjoyed having the opportunity to watch an intelligent program.

I want MORE Murphy Brown. I love this show.

Please DO NOT CANCEL! I love this show and I love that they added the dog.

Save Murphy Brown and Benny Brown. Love that lil guy! Love the pot shots at Trump!