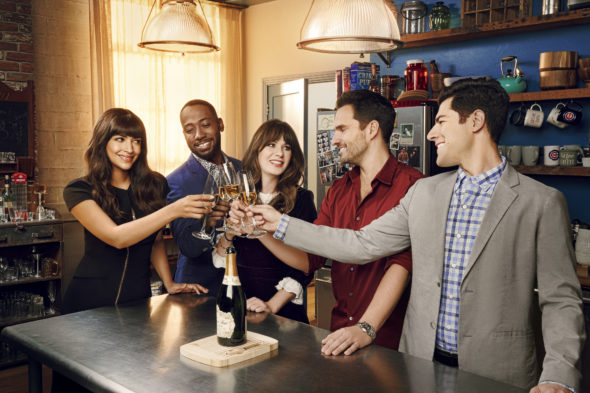 What’s new with Jess and the gang? Has the New Girl TV show been cancelled or renewed for an eighth season on FOX? The television vulture is watching for the latest cancellation and renewal news, so this page is the place to track the status of New Girl, season eight. Bookmark it, or subscribe for the latest updates. Remember, the television vulture is watching your shows. Are you?

A FOX sitcom, New Girl stars Zooey Deschanel, Jake Johnson, Max Greenfield, Lamorne Morris, and Hannah Simone, with guest star Nasim Pedrad. The ensemble comedy centers on Jess (Deschanel), a free-spirited young woman and her friends. Together, they serve as something of a chosen family as they navigate modern love and friendship. The seventh season kicks off with Jess and Nick (Johnson) together, having just returned from a whirlwind European book tour. Meanwhile, stay-at-home dad Schmidt (Greenfield) and working mom Cece (Simone) are raising their daughter, Ruth, and Winston (Morris) and Aly (Pedrad) are married, with a baby on the way.

The seventh season of New Girl averaged a 0.58 rating in the 18-49 demographic and 1.48 million viewers. Compared to season six, that’s down by 38% and 28%, respectively. Find out how New Girl stacks up against the other FOX TV shows.

There’s no need to worry about whether FOX will cancel or renew New Girl for season eight. When the network picked up this season last spring, they made it clear it was a seventh and final season renewal. Hopefully, the writers have used all that advance notice to craft a satisfying New Girl TV series finale. Either way though, my patience and persistence have paid off, and I’m going to eat. Still, I’ll keep an eye on the ratings and any news about possible spin-offs or reunions. Subscribe for free New Girl updates.

What do you think? Do you hope the New Girl TV show will be renewed for a eighth season? How would you feel if FOX cancelled this TV series, instead?

Well I don’t know where to start the episodes made me so excited to watch new girl, it’s inspirational to get up off my bottom and actually attempt jogging. That didn’t go to plan … please for season 8 until season 10 at least

Loved this show. So entertaining. I am really hoping you continue on with Season 8 through 100 :-), well 8 anyway for sure. Thank you for the 7 Seasons. Just really enjoyed every episode.

Please keep new girl this is my show

Please please please, I love show, Season 8 needs to be reconsidered. This Cast, These writers, it’s Genius! This is the best show on TV!