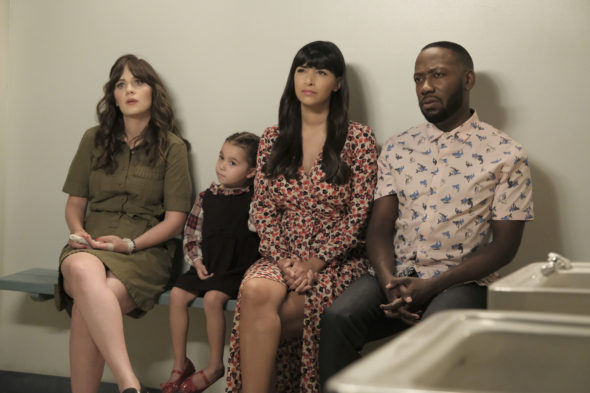 Is the seventh and final season of the New Girl TV show on FOX a fitting send off to this beloved sitcom? As we know, the Nielsen ratings typically play a big role in determining whether a TV show like New Girl is cancelled or renewed for season eight. Unfortunately, most of us do not live in Nielsen households. Although they didn’t technically “cancel” it, many viewers are frustrated their viewing habits and opinions weren’t considered, before FOX decided to end New Girl with season seven. We care what you think, so we invite you to rate all of the New Girl season seven episodes for us here.

A FOX sitcom, New Girl stars Zooey Deschanel, Jake Johnson, Max Greenfield, Lamorne Morris, and Hannah Simone, with guest star Nasim Pedrad. The ensemble comedy centers on Jess (Deschanel), a free-spirited young woman and her friends. Together, they serve as something of a chosen family as they navigate modern love and friendship. The seventh season kicks off with Jess and Nick (Johnson) together, having just returned from a whirlwind European book tour. Meanwhile, stay-at-home dad Schmidt (Greenfield) and working mom Cece (Simone) are raising their daughter, Ruth, and Winston (Morris) and Aly (Pedrad) are married, with a baby on the way.

What do you think? Which season seven episodes of the New Girl TV series do you rate as wonderful, terrible, or somewhere between? Should FOX have cancelled or renewed New Girl for an eighth season? Don’t forget to vote, and share your thoughts, below.

When you watch New Girl every family member starts watching too because it really is so good. You laugh and cry and scream right along with all of the characters! Please give us a season eight. We need a few more “mess arounds”:).

This is the best show i’ve ever watched