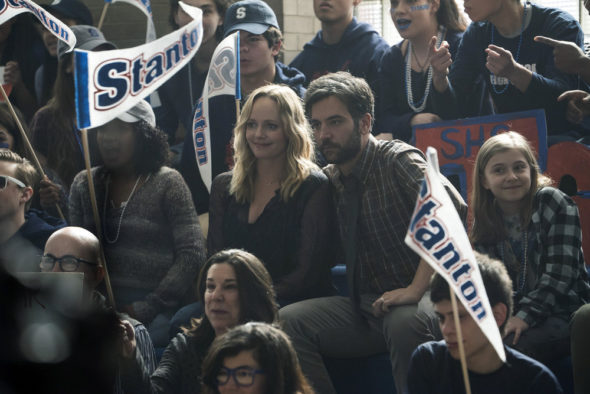 Does the first season of the Rise TV show on NBC lift your spirits? As we all know, the Nielsen ratings typically play a big role in determining whether a TV show like Rise is cancelled or renewed for season two. Unfortunately, most of us do not live in Nielsen households. Because many viewers feel frustration when their viewing habits and opinions aren’t considered, we’d like to offer you the chance to rate all of the Rise season one episodes here.

An NBC high school drama, Rise stars Josh Radnor, Rosie Perez, Auli’i Cravalho, Damon J. Gillespie, Marley Shelton, Rarmian Newton, Ted Sutherland, Amy Forsyth, Casey W. Johnson, Taylor Richardson, Joe Tippett, and Shirley Rumier. The series centers on Lou Mazzuchelli (Radnor), who is the fictional analogue to Lou Volpe in the Michael Sokolov book, Drama High. Although he is committed to his students at Stanton High School, Lou knows he needs to shake things up, in order to rekindle his passion for teaching. To that end, he petitions to direct the school’s theater program, but soon realizes he signed up for a whole lot more than he originally expected. Soon though, the faculty, student body, and even the town residents find themselves caught up in the new spirit at the school.

What do you think? Which season one episodes of the Rise TV series do you rate as wonderful, terrible, or somewhere between? Should NBC cancel or renew Rise for a second season? Don’t forget to vote, and share your thoughts, below.

I thought this was an excellent show and very well written. So sorry to see it cancelled.

Rise was entertaining and, in my opinion, skillfully done. I think we have enough cops/robbers ,whodunnit, and reality shows. What we need to get back to is good old fashion entertainment. Please give this show another chance!

Such a great show with a great cast of actors. All the caricatures are very relatable, don’t cancel this quality show!!!

This show is a representation of everything teenagers go through and suffer from. It’s very touching and addictive.
Why do all shows that dare to speak the truth and the reality of life have to be cancelled? It’s okay if not everybody is up to that level. A second season is well deserved. Fans want to know what is going to happen next!

I loved this show! It was on such a short time & didn’t have a chance as it didn’t start in the fall. I hope NBC reconsiders. The acting was amazing , each episode touched me as the characters were so real!!! This show was far better than This Is Us! It needs another chance!

I loved this show! It made me miss teaching high school students and I have been retired for 8 years. Hello other networks, please pick it up!!!

I loved the show. Please bring it back!

I really enjoyed this show. I have been looking forward to seeing what happens next only to find out it got cancelled. Please reconsider.

I taped this series and binged watched …So disappointed that it’s not being renewed. What are they thinking? Do they not realize that people record series and view much later, and then tell there people hey I really liked it you should watch this ! This show touches on so much ! Loved it ! So I am asking NBC please reconsider!

Once again NBC gets a good show and in their infinite wisdom, doesn’t see their ass from their face and cancels the

I really loved this show because it was something new and exciting. I can’t believe NBC would cancel a show that could of been a hit if marketing was done better.

I felt this was some of the best TV I had ever seen. Maybe it’s rough starting in the middle of the year and maybe it didn’t get enough marketing? I don’t know – I thought it was beautifully made and incredibly moving. I hope NBC will reconsider!!!

My thoughts exactly. Where was the promotion? Who looks for new shows in March?

How can you not enjoy a show like this?! What is wrong with the people in this country? Their mentality? Intellect? Creativity? Entertainment? Talent? Oh, I forgot, we have reality shows. Brilliant!

I really enjoyed the show… I need to know what happens next.. so many loose ends….UGH!!!