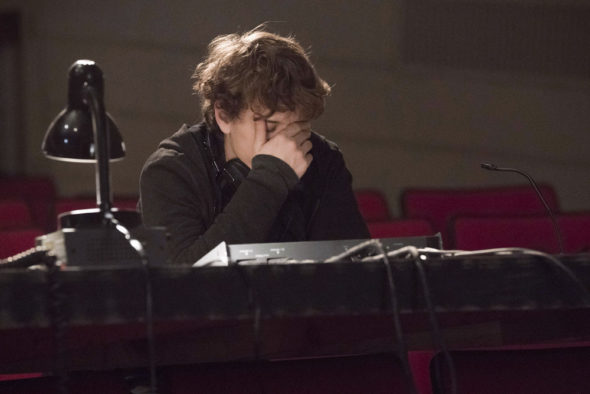 Talk about a letdown. The Rise TV show has been cancelled after just one season on NBC. The high school drama from Jason Katims, who knows a thing or two about shows like that,  premiered on the Peacock Network on March 13, of 2018. Ratings for the first two episodes were good enough, but the series just couldn’t sustain its performance in the Nielsens, thereafter.

An NBC musical drama, Rise stars Josh Radnor, Rosie Perez, Auli’i Cravalho, Damon J. Gillespie, Marley Shelton, Rarmian Newton, Ted Sutherland, Amy Forsyth, Casey W. Johnson, Taylor Richardson, Joe Tippett, and Shirley Rumierk. The series centers on Lou Mazzuchelli (Radnor), who is the fictional analogue to Lou Volpe in the Michael Sokolov book, Drama High. Although he is committed to his students at Stanton High School, Lou knows he needs to shake things up, in order to rekindle his passion for teaching. To that end, he petitions to direct the school’s theater program, but soon realizes he signed up for a whole lot more than he originally expected.

Rise: A Look at the Ratings

The first season of Rise averaged a 0.85 rating in the 18-49 demographic and 4.44 million viewers. Find out how Rise stacks up against other NBC TV shows.

What do you think? Did you watch the first season of the Rise TV series on NBC? If it were up to you, would it have been cancelled or renewed for a second season?

I heard this was renewed and now I see it has been cancelled. Another one of my favorite shows this season with such great potential with the premise and storylines …. I even loved how they brought in the COVID / zoom meeting and what our court systems are actually going to have to look at (if not already) but really? Quit cancelling great shows without giving them a chance. If you think you are going to cancel then at least make an end show to wrap up the storylines for us faithfull viewers.

I loved the show. Rarely view tv series yet this one got all of my attention. Was bummed out when I found out it was canceled. Even called friends in Hollywood getting their view point. Be nice to see someone pick it up and try it again.

I loved the show Rise and I am very disappointed that it has been cancelled. I hope they reconsider the decision.

I LOVED Rise. I could hardly wait for every new episode. One of the best new shows that I’d seen in a long time. I was really disappointed that you canceled it.

I loved the show and I am very disappointed that it has been cancelled.

I watched the season and was hoping for another one we need more shows like this one. Disappointing you cancelled it