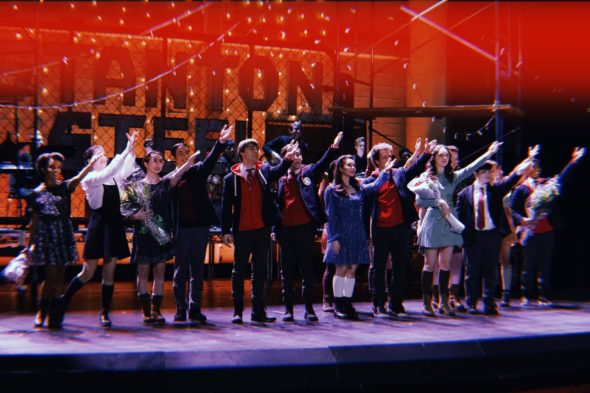 School is out — permanently — for the cast and crew of NBC’s Rise TV show. The peacock network recently cancelled the musical drama series so there won’t be a second season. But, did the execs make the right decision?

The Rise series debuted in March and got off to an okay start with a 1.23 rating in the 18-49 demographic with 5.50 million viewers. It was no doubt aided by following the season finale of NBC’s biggest drama, This Is Us.

Week two saw a small drop when it moved to its new 9pm timeslot, following The Voice. Week three saw a sizable drop and the show fell to a 0.80 demo rating with 4.32 million. The ratings have dropped a bit since then but have remained pretty consistent. NBC cancelled the show last week, likely because they expect a show like this to draw better numbers when it airs out of The Voice.

Some would argue that Rise had some stiff competition on the other networks, remained pretty consistent for the past several weeks, and the series had just 10 episodes in its first season.

Unfortunately, there hasn’t been any word of the show finding a new home for season two so tonight’s finale looks like the end of the road.

What do you think? Did NBC make the right call or, should the network execs have given this show some more time to prove itself? Would you have watched season two?

I loved loved loved this show and wish someone would pick it up — netflix, amazon, anything!

I LOVED the show, waiting for the 2nd season!
Please bring it back!!

I loves the the show and I am VERY disappointed that it was cancelled. The show was interesting an deep, but not cumbersome.
At last a show that delt honestly and realistically with coming of age issues without “going Hollywod” like Glee did.
What a shame. So to your question: yes. I think NBC made a huge mistake by cancelling the show.

So miss this show! It had so much in it and was so real. A real shame that it was cancelled.

very disappointed that Rise won’t have a 2nd season……

There were so many iconoclastic subplots going on and so many topical interactions; this was an intelligent, well-scripted effort that is sadly not being allowed to mature and grow into its own. Could this be yet another casualty of the evangelical conservatism sweeping this country?

Another show I ends up enjoying & get cancelled. I know for sure there were a lot more in the storyline & sadly we will never going to figure out what’s is? At least, they should cancelled the show in Season 2. They should have a better ending.

I didn’t catch this show during the season. I just watched the whole season and thought it was Amazing. It touches So Many Issues students face on a daily basis.
I definitely would watch season two.

I can’t believe another of my favorite shows is CANCELLED!! The show had so many great story lines that were just beginning! I’m SO dissapointed!!

Watched the first three episodes. Found it boring and said the show wouldn’t last. It just didn’t have story lines to hold one’s attention despite the actors performances. I expect this show wanted to emulate “Fame” or ride the coat tails of the “Glee” fans.