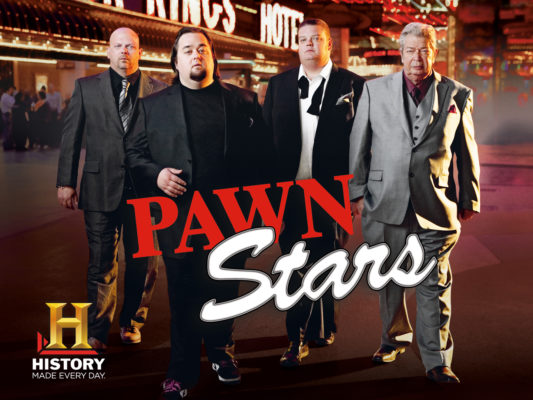 In the 500th episode of Pawn Stars, Rick Harrison celebrates by spending some capital in our nation’s capital. First up is a set of silver spoons made by American patriot Paul Revere. Can Rick cut a deal for this cutlery? Meanwhile, back at the Gold & Silver Pawn Shop, things get lit when a talking candle prop from “H.R. Pufnstuf” fires things up. Later, a flamingo given away at the opening of the 1946 Las Vegas’ Pink Flamingo Hotel flies in. Will Corey Harrison swoop in to “peck” it up? Finally, back in D.C., Rick gets his hands on two items worth millions of dollars that belonged to our American forefather, George Washington.

The Gold & Silver Pawn Shop is brushed with a stroke of luck when an original Marc Chagall painting draws Rick Harrison’s attention. Will he master this piece, or will he gloss over it? Later, Rick takes a swing at buying a Boston Red Sox World Series ring. Can he strike a deal, or will he strike out? Corey Harrison goes crazy for a first edition of Ken Kesey’s novel, “One Flew Over the Cuckoo’s Nest.” When the BMW that legendary rapper Tupac Shakur was shot in rolls up, all eyes are on Rick and Chumlee. Will they drive this deal home, or decide to steer clear?

The history of money-lending dates back thousands of years; long before the pawnbrokers from HISTORY’s hit series Pawn Stars helped people make ends meet by providing loans in exchange for personal items of value. There is no better example of today’s pawnbrokers than the Harrison family’s Gold and Silver Pawn shop in Las Vegas – the modern day mecca for people in need of quick cash. Three generations of Harrison men clash with friendly camaraderie over items from classic cars to samurai swords. Here, everything has a history, and everything has a price. And you never know what’s going to walk through the door.

What do you think? Are you a fan of Pawn Stars? What are some of your favorite moments from the series so far?