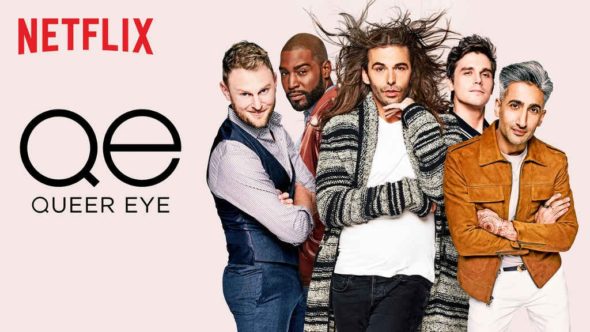 Read more info about the Queer Eye renewal from Netflix below:

Today, Netflix announced second seasons for several unscripted original series: Dope, Drug Lords, Nailed It!, Queer Eye and The Toys That Made Us.

“These series are indicative of what we’re trying to accomplish for Netflix unscripted: working with world-class producers to create the best unscripted shows on television,” said Bela Bajaria, Vice President of Content for Netflix. “These series elevate the genre with innovative takes on familiar formats. They deliver immersive and nuanced stories. They elicit so many emotions from viewers, from tears of laughter to tears of joy – and that’s just Queer Eye.”

· Dope
· A docu-series filmed from the perspective of dealers, users and the police, this vivid series features a bracing look at the war on drugs.
· Season two starts April 20, 2018.
· Dope is produced by Wall to Wall Media Ltd., with Jeremy Dear and Chris Lent serving as executive producers and Ralph Perring as series producer.

· Drug Lords
· The stories of history’s most notorious kingpins, their terrifying enforcers, and the men and women who’ve sworn to bring them down.
· Michael Welsh and Jim Lindsay serve as executive producers. Chris Boulding is series producer, Elaine Morris is head of production and Ian Russell is head of international programs. Drug Lords is produced by ITN Productions.

· The Toys That Made Us
· The minds behind history’s most-iconic toy franchises discuss the rise – and sometimes fall – of their billion dollar creations. Season one followed Barbie, G.I. Joe and other franchises.
· Brian Volk-Weiss, Tom Stern, Cisco Henson, Anne Carkeet and Edwin Zane are executive producers. The Toys That Made Us is produced by The Nacelle Company.”

What do you think? Are you a fan of Queer Eye? Are you glad it’s been renewed?