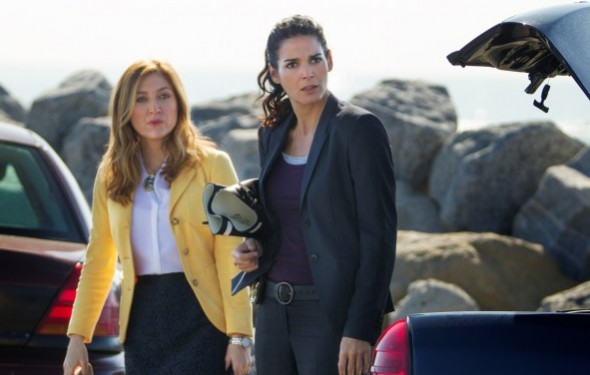 It looks like season eight won’t be on the docket for police detective Jane Rizzoli and medical examiner Doctor Maura Isles. Variety reports that Turner Entertainment chief creative officer Kevin Reilly confirmed that the Rizzoli & Isles TV show has been cancelled by TNT.

Though stars Angie Harmon and Sasha Alexander likely would have kept making episodes, Reilly said that, “It felt like it was time.” The current cast also includes Lorraine Bracco, Jordan Bridges, and Bruce McGill.

While Rizzoli & Isles remains one of TNT’s top-rated shows, the ratings have fallen quite a bit over the years. The sixth season, which resumes on February 15th, is averaging a 0.7 rating in the 18-49 demographic with 4.35 million viewers. That’s down by about 17% when compared to the fifth season’s ratings.

On the plus side, there are still plenty of new episodes to come. There are six more episodes remaining in the sixth season and the show’s already been renewed for a seventh season of 13 episodes. The latter will begin airing in the summer.

What do you think? Do you agree with the decision to end the series? Is it the right time or, should TNT keep it going?

Nothing like taking another good strong female lead TV show off air! This is one of the best tv shows around!

One of our favorites since the beginning. Can’t imagine what will replace it.

Please don’t cancel Rizzoli & Isles, the show is great. It is well written and you can’t beat the cast. I look forward to it both in the winter and summer. Not many good shows on TV any more and this is one of the best. Thank you for the consideration.

Please don’t end it yet, your just getting warmed up

all the good shows get cancelled — please make an exception here!!!
enjoy cop shows with human relationship side instead of shoot-em-ups. would so miss it.

Please do not cancle. Love this show.

Totally disagree with this. All the good shows are being cancelled. Why am I paying for cable anymore.

USA already cancelled all of my favorite shows and replaced them with reality and junk. The last show was Royal Pains and it is ending this summer. Except for some NCIS reruns, no reason to watch k Now TNT has cancelled Rizzoli and Isles. My favorite shows on TNT are Rizzoli and Isles and Major Crimes. I love both of these shows. I don’t understand why networks cancel the good shows, particularly when they still have good ratings, and replace them with unwatchable shows no one cares about. Not the least bit interested in Animal Kingdom or Good Behavior. Where… Read more »

“Not the least bit interested in Animal Kingdom or Good Behavior. Where do they get the ideas for these shows anyway.”

Interesting social engineering, eh? I agree. Those shows show garbage about garbage and the only thing I can think they are trying to do is instigate like Gamergate.

Get ready over 35’s…the nasty younglings with a taste for mayhem, violence and blood are growing up. What do you think is next? It’s unfortunate that the shark-eat-shark mentality of most corporations actively SEEK out those who would destroy everything around them to get ahead.

Never miss an episode. In fact I start looking up the date for the next season when it hasn’t been on for a while. Why do networks always cancel the good shows?

Rizzoli and Isles is a great show. Too bad a “good” show is being cancelled.

This is terrible news. Love the show and love the cast. Why are the good shows cancelled? Please don’t cancel.

Great show. Haven’t missed one show. Seems like you always get rid of good shows and replace it junk. People in Boston love it. Please renew or u will be loosing a lot of viewers.

This was the best show on TV…..Don’t take it of the air. Can’t believem this is happening to a great show.

NO NO NO This is one of the best shows on tv!!. I have it set to record so I don’t miss an episode. Why stop a really great show with great actors and fun interesting story lines. I am so disappointed. There are mostly reruns of the same show all night long, sports, or the same movies they have shown three months ago.. What happened to the good shows I would record or watch since the big 4 have nothing ..
DO NOT TAKE RIZZOLI & ISLES OFF ===== guess have to find another station.

They always cancel the good show. Somebody pls oick it up.