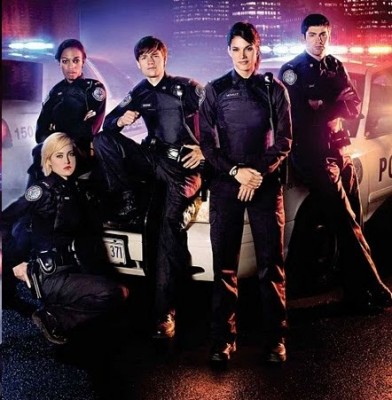 Andy McNally (Missy Peregrym) is empathetic, sometimes at a cost. She’s also very bright but didn’t get off to a great start in her new job, already clashing with training officer Sam Swarek (Ben Bass). He just wants her to trust her instincts. That’s what he did when he was undercover as a drug dealer for eight months until his cover was blown and he was forced back on the beat. Andy has a hard time not controlling every aspect of her life, and that just doesn’t work out well for a cop. She should know that too since her dad was also a cop and now hits the bottle too often. After watching his struggles, Andy sometimes wonders if she can really do this job.

Andy’s nearly exact opposite is fellow rookie Dov Epstein (Gregory Smith). He seems to always be in trouble because of his gung-ho approach to policing, yet he gets the job done. He was very sickly as a child and spent his time watching Starsky & Hutch, much to the disapproval of his hippie parents. He’s seeing a very different side of policing than what he saw on television, thanks to his riding shotgun with training officer Oliver Shaw (Matt Gordon). Oliver isn’t about the flash and is a very easy-going, family guy. If Dov can get beyond his wise-cracking, he’ll hopefully be able to prove himself to be a serious police officer.

Fellow rookie Gail Peck (Charlotte Sullivan) may not have the best police instincts, but she plays the game and isn’t above brown-nosing. Like Andy, she was also born into a family of officers, with her mother being the Superintendent. This makes it really hard for her to fit in and be accepted by the other rookies. She’s much more vulnerable than she comes off, as fellow rookie Chris Diaz (Travis Milne) starts to suspect. Chris knows every single rule and regulation and always has a crisp uniform. This small-town guy is all about doing the right thing, but being a cop in the big city is going to teach him that sometimes you have to break the rules.

Andy’s best friend from the police academy is Traci Nash (Enuka Okuma), and for good reason since she’s a great confidant. Her success in policing is in her ability to read people, seeing everyone as a suspect and not paying any attention to politics. Unlike the others, she didn’t go to college, but she has a different kind of education from the streets. She’s having an affair with Detective Jerry Barber (Noam Jenkins) who she met at the Academy.

An invaluable mentor to all of the rookies is training officer Noelle Williams (Melanie Nicholls-King). Her big lesson to the newbies is “get over yourself.” She’s a single woman who’s considering becoming responsible for more than just herself, a prospect that scares her like nothing else.

Detective Luke Callaghan (Eric Johnson) is obsessed with the murder of a rookie, an unsolved case from two years ago. As a child, he witnessed a family trauma that left him going back and forth between foster homes. His personal history finds him being drawn to Andy, suspecting that she has her own troubling family secret.

Series Finale:
Episode #74 — Epiphanies
Andy does her best to have Sam not see her on this their wedding day. She makes him close his eyes before giving him a kiss.Traci is forced to delegate her Maid of Honor duties due to a homicide investigation. Chloe’s attempt to edit a music slideshow briefly interrupts the rundown of the murder case. The victim, Lindsay McConnell, was found dead at the bottom of the stairs with a bloody hammer nearby. Thanks to Chloe’s cooking knowledge and a little deductive reasoning, the team realizes this tragic death was actually accidental. Everyone is off to the wedding!

Nick shows up at Andy’s place to tell her he’s going to miss the wedding. He’s off to Vancouver. But first, he needs to stitch Andy into her ripped wedding dress. They chat about their mutual happiness. After Nick leaves, Andy must drive herself to the ceremony. She gets a little turned around on a back road after coming across a stopped convertible. Andy swings a U-turn and later picks up a young girl, Starr, who was hitchhiking.

Andy learns that her passenger was in the convertible she saw earlier. Starr’s story is that the driver assaulted her. Andy turns back to find the guy bloodied an unable to move. A panicked Starr takes off in Andy’s truck leaving the frustrated bride-to-be stranded in the middle of nowhere. Andy heads back to the car to see that the driver has been stabbed.

Andy calls Duncan, but loses the signal before she can get out a full message. The wounded driver, Angus, says he was on his way to surprise his girlfriend. It was going to be their 74th epiphany. He’s been keeping track of all their special times he wouldn’t have appreciated before he met his true love. Angus is in bad shape. Andy needs to get to the highway for help.

Sam’s dad, Jay Swarek, gets a special parole pass to attend his son’s wedding. He convinces Chris and Dov to make a pit stop so he won’t show up at the ceremony empty-handed. Things seem a little fishy at the house where they stop. Dov asks Duncan to check on the address. The resident has criminal past with Jay, who explains that he just needed to retrieve a watch he once took away from Sam as a kid.

Sam is surprised to see his father at the church. He had no idea he was coming. He also has no use for the watch, as he still carries the one his old friend Jerry Barber gave him. As for Andy, she’s shocked to see Duncan coming down the road. Enough of her message got through. Help is on the way. Andy calls Sam to let him know that she’s on her way, too.

After a brief delay for a funeral in the church, the wedding is back on track. Andy’s father walks her down the aisle. Sam is joined by the love of his life at the altar. He recites his very personal, very touching vows. Then it’s Andy’s turn. She lost her prepared vows, so she shoots from the hip. Her words are just as touching as Sam’s. She promises to continue loving him one epiphany at a time. Rings are exchanged. Andy and Sam are then pronounced husband and wife. Cheers fill the church.

Oliver introduces Andy and Sam at the reception. They share their first dance. Others join them on the floor. Later, Gail and Detective Anderson have their chat interrupted by Duncan, who is grateful to have been invited to the wedding. Actually, he wasn’t invited. Even so, he’s grateful to be included. Duncan breaks the news that he’s being transferred. He thanks Andy for teaching him everything he knows.

Sam awakens his new wife with kisses from Boo Radley. Elsewhere, Chris and Chloe are surprised to see that Detective Anderson spent the night with Gail. At the station, everyone is bracing for change. Dov is now a detective-in-training. Traci is heading up Guns & Gangs.

Oliver is back as staff sergeant. Chloe does a happy dance when she learns she’s staying put. Andy, Chris and Gail will be training rookies. Oliver’s morning briefing is cut short thanks to reports of criminal activity. He orders all the coppers of 15 Division to get out there. With a speech that ends with a knowing look at a smiling Andy, Oliver declares, “Serve, protect and don’t screw up.” (Courtesy ABC.)
First aired: September 3, 2015.

What do you think? Do you like the Rookie Blue TV show? Do you think it should have been cancelled or renewed for a seventh season?

SO sad to see Rookie Blue come to an end. Watching all the reruns now. Excellent show and would love to see it come back.

A great summer show..I wii miss..nothing to watch but reruns..bring it back ..loved the cast

what a wonderful cast and great storylines….just what DOES it take to keep a good show????? puzzled, to say the least……some of the garbage that we are forced to watch, and this great show nixed….will never get it.

Bring back Rookie Blue…………Love it. Was looking forward to watch for the summer!

Please bring back this wonderful series. Each of the characters was multi layered, which made the whole ensemble a joy to watch. The stories had such interesting twists, not just any procedural.

I loved Rookie Blue series, I loved it so much that I record them on my DVR and I will watch them over and over. I loved the romance part of it and the tense and scary part of the series. Please, please bring it back.

Please please bring Rookie Blue back , I love that show , been waiting all year to watch it , I don’t understand channel 7 , this is the only show they have worth watching , it’s really horrible , this channel going down the drain

Please please please bring Rookie Blue back it was my favorite show and I just loved the storyline and the characters. Gave me something to look forward to.

Rookie Blue gave me something to look forward to week after week. Please bring it back. It was the best cop show on tv. Andy got her true love but what about Gail Dove and the rest….still so much stories to be told

Bring back rookie blue the summer will not be the same

Please bring Rookie Blue back. It was the best cop show on TV! There is not much to watch anymore that makes you look forward to the next episode. Rookie Blue was the exception. The actors were great; everyone of them. The plots were real. Very disappointed! Why do always cancel the best shows? What can I do to help bring my favorite show back?

This was one of the BEST shows on TV, what were these idiots thinking.BRING IT BACK!!!!!!!!

Rookie Blues was one of the BEST shows on Television, what were these idiots thinking. BRING IT BACK!!!