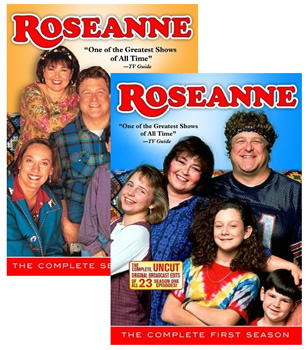 When Roseanne hit the airwaves in 1988, it was like a breath of fresh air to many TV viewers. Unlike the Huxtables of The Cosby Show or the Keatons of Family Ties, the Conners had real problems that other TV shows weren’t showing at that time. They were a working class family who were just struggling to get by on their limited household income. They weren’t perfect or always nice to each other and many of their problems didn’t get solved in a half hour.

Starring Roseanne Barr, John Goodman, Laurie Metcalf, Sara Gilbert, Michael Fishman, and Lecy Goranson (later replaced by Sarah Chalke), Roseanne ran for nine seasons and 222 episodes. It was a top-rated show for most of its run. Though many believe that the series went on a bit too long, it’s difficult to argue with the fact that Roseanne helped to change the face of television along the way.

All nine seasons have been released on DVD. Barr and fans expressed their unhappiness when the first season was released using syndicated (edited) episodes. For some reason, Anchor Bay (the DVD company) was unable to obtain permission to release the original broadcasts and fans had to make do. Now, Mill Creek Entertainment has started re-releasing the series on DVD and they’re using the full broadcast versions of the episodes.

UPDATE: Congratulations to Adam Landes who won these DVDs in our contest. Thanks to everyone who played and we’ve got more contests coming!

I would love to win

I watch Roseanne all the day and somehow ALWAYS always always end up laughing hysterically!!! She is the best!!!

Roseanne was a good show and I love TV DVDs!

one of the best shows on family life!

I have watched my DVDs from beginning to end as I’ve missed this show. I just recently bought the Halloween collection that was updated and would LOVE LOVE LOVE to get these new updated seasons.

Roseanne is my all time favorite show! I watch it every time it’s on tv!

This was one of my very favorite shows when it was on the air. I’ve been a fan of Roseanne since her stand-up days and I don’t know how anyone could love John Goodman. Put the two together and you’ve got the perfect sitcom.

Good luck to all who are entering!

Only one winner? Roseanne won the lottery. She can afford to send everyone free dvds! 😉

this show was pretty good in the beginning

Two great seasons of a fantastic show! Good luck to everyone that enters, Especially me!

I’d love to have Roseanne on DVD! 🙂