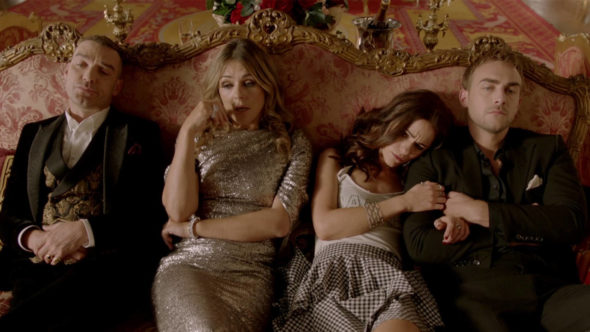 Does the fourth season of The Royals TV show on NBC give the viewing audience the royal treatment? As we all know, the Nielsen ratings typically play a big role in determining whether a TV show like The Royals is cancelled or renewed for season five. Unfortunately, most of us do not live in Nielsen households. Because many viewers feel frustration when their viewing habits and opinions aren’t considered, we’d like to offer you the chance to rate all of The Royals season four episodes here.

An E! Entertainment primetime soap opera, The Royals stars Elizabeth Hurley, William Moseley, Alexandra Park, Jake Maskall, Tom Austen, Genevieve Gaunt, and Max Brown. The drama centers on a fictional British royal family, in modern day London. They inhabit a world of opulence that caters to their every desire, but one that also comes with a price tag of duty, destiny, and intense public scrutiny.

What do you think? Which season four episodes of The Royals TV series do you rate as wonderful, terrible, or somewhere between? Should E! cancel or renew The Royals for a fifth season? Don’t forget to vote, and share your thoughts, below.

This show is amazing. The writers are creative and witty. Every show is surprising and fresh. The actors are brilliant! It just needs more advertising. I’m 47 and this is one of my favorite shows of all time!!!

I love the Royals!!! It is my favorite show on E! I hope the Royals continue with another season. I look forward to watching and if miss an episode I catch up on demand. Keep the Royals!!!!

I also forgot to mention this is my favorite TV show on TV I have bought all 3 seasons of the Royals and will buy season 4 if it’s possible to purchase it and hopefully there will be several more season’s to purchase. Did I mention the Royals is my favorite TV show on TV today I will watch them all yr round over and over and over that’s why I bought all the season’s.

The Royals are the best drama show I have ever seen on TV I do think more and more people are starting to watch it and love it from what I gather on Facebook they just don’t know how to go in and rate it I know I didn’t I just happen to stumble up on it. So now I got to rate the show all I see in comments on Facebook is :RENEWTHEROYALS cancel the arrangement. Please please please don’t cancel the Royals and if you do renew them please let there be more episodes and earlier series maybe… Read more »

This is probably one of the best, if not the best, show on TV. I love it. I’ve been watching since day one and I would be so lost without The Royals!!!

This is one of the best shows on .. i have only recently discovered it and am completely addicted

I do not watch ANY other tv show. I enjoy this show as it is so far out, I can sit back and be entertained w/o wondering what subtle liberal brainwashing they’re trying to toss my way. Instead of cancelling, make MORE episodes every season.

I totally agree….there really should be MORE than ten episodes per season! AND not such a long wait between seasons!!! I am fortunate to own every episode from every season…but there are MANY OTHER PEOPLE WHO DON’T & they lose track of what happened in the season before!! Please #RenewTheRoyals#Season5#Loyalroyalsfans…..LOVE THIS SHOW

Please renew the show!! I love watching The Royals. I go into sbow hole when each season is over always waiting for the next one. So yes, do a season 5, etc.

Love watching this series. Jasper and Eleanor are wonderful… Love them

Please renew! This is a great show with really great actors. I’m hooked! The season is so short, I go through withdrawals waiting for the next season to start.

Please renew! This is a great show with great actors.

Please renew the show!! It’s a fresh modern perspective of the monarchy with hints of tradition and who doesn’t love the relationships!!! The cast is awesome and doing great. Please give them another season and viewers let’s watch!!

I love The Royals tv series. Lots of juicy drama and the most beautiful cast ever. All the actors are brilliant. It makes me tune in every week, I really look forward to the next episode. Please don’t cancel this show!