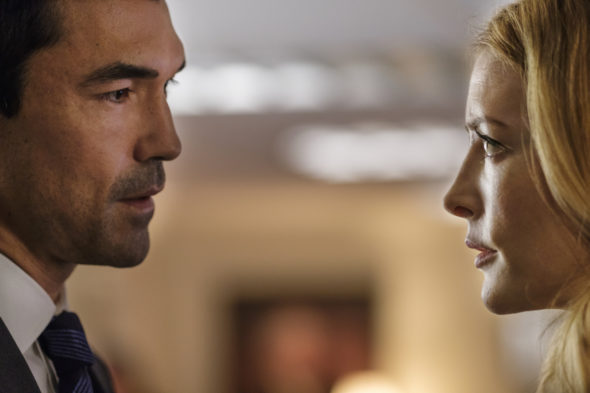 Nobody’s safe. CBS has cancelled its Salvation TV show after two seasons. During the second season, which finished its run on September 17, 2018, the science fiction thriller’s ratings dropped significantly, so the Salvation cancellation has been expected.

A CBS suspense drama, Salvation stars Santiago Cabrera, Jennifer Finnigan, Charlie Rowe, Jacqueline Byers, Melia Kreiling, Ashley Thomas, and Ian Anthony Dale. The story centers MIT graduate student Liam Cole (Rowe) and tech genius Darius Tanz (Cabrera), who discover that in six months, a huge asteroid will crash into the Earth. In season two, the truth is out. Now that it is no longer a secret, the impeding threat will elicit both the best and worst from humanity.

Salvation: A Look at the Ratings

The second season of Salvation averaged a 0.33 rating in the 18-49 demographic and 2.67 million viewers. It was down by 36^ amd 24%, respectively, in comparison to season one, it is down by 36% and 24%. Check out how Salvation stacks up against the other CBS TV shows.

TV By the Numbers reports CBS has confirmed Salvation is cancelled.

What do you think? Were you a fan of the Salvation TV series? If it had been up to you, would CBS have cancelled or renewed this TV show for a third season.

Very disappointing it will not continue for season 3, why does everything have to be by the numbers, how about gauging by quality once in awhile? Come on CBS, change your mind and choose the intellectual option…. hold on to those great actors and crew for one more go, to conclude the series properly.

I’d’ve saved it!! Thought it was a great show, loved the finale, so many possibilities that might have been explored (in a happier TV universe). I hope someone picks it up!

Huge, huge disappointment. This cast had INSANE chemistry together. I never wanted each episode to end. The writing was absolutely top-notch. I was always entertained when I watched this show- every.single.episode. MOST tv isn’t like that these days. Seriously, very disappointed.

We’ll see if Netflix or Amazon or someone like that picks it up. I’m surprised they didn’t move it to All Access. SYFY should pick it up. It would be one of their top shows.

We loved this show. So disappointed that there will not be more episodes.

Why do the good shows ALWAYS get cancelled?! What a disappointment! I loved watching Salvation! Intriguing actors and actresses and creative and intriguing storyline! I wanted to see how far they could go with the interesting storyline…not an asteroid…maybe an Alien? Or alien ship? What about Darius and Graces romance?? Maybe they can continue the series on Netflix? Please!

Season two did bring a resolution to many of the plot threads, but it ended with the very intriguing premise that the asteroid might really be a space ship on its way to Earth. I feel satisfied with what was resolved, but disappointed that the new plot line will never be developed.

Realy liked is please make an new one

I really liked salvation and would of liked to see a season 3. Wasn’t happy with how it ended. It would of been nice to have a descent ending instead of leaving us hanging once again.

Crap!! I hate when shows end on a cliffhanger and then don’t get renewed. Thanks CBS-another stupid move

SEE IT DOESN’T MATTER what the rest of us want to watch only 18-49 year olds matter in our society. I am so DONE with networks counting the rest of us as unimportant just like our government. But who cares about my opinion as I’m just a nobody.

I enjoyed Salvation and I am sorry to see it cancelled!