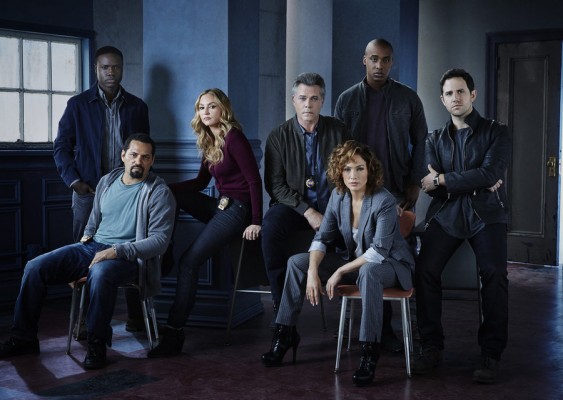 Following their leader, Lt. Matt Wozniak (Ray Liotta), this team crosses the line, to protect their precinct and each other. Can these cops keep their streets safe, without arousing the Feds’ suspicions?

Detective Harlee Santos (Jennifer Lopez) is a single mom. When her new colleague, Michael Loman (Dayo Okeniyi), kills an unarmed man, she covers it up.

FBI Special Agent Robert Stahl (Warren Kole) arrests her. Using her daughter as a bargaining chip, Stahl gets Harlee to act as an informant.

Harlee does what she can to keep her child and protect her coworkers, while still avoiding arrest. As he gets to know Harlee, Stahl fixates on her.

Wozniak realizes there is an informant in their midst. He won’t rest until he finds out who it is.

Concerned he will figure her out, Harlee suggests polygraphing the entire crew. That does not end well.

Reviewing tapes for a case, Wozniak watches a recording of his first meeting with Harlee. It documents something they have kept buried.

Harlee gives Stahl the evidence from Tess and Espada’s unofficial investigation of a crime, instead of delivering the goods that would incriminate Wozniak. When confronted by her lieutenant, will she be able to bluff her way out?

Series Finale:
Episode #36 — By Virtue Fall
Harlee faces a police commission as Wozniak and the crew scramble to help her from the outside.
First aired: August 19, 2018.

What do you think? Do you like the Shades of Blue TV show? Do you think it should have been cancelled or renewed for a fourth season?

Continue this show. Great acting by all!

I love this show. Jennifer is great!!!!

JENNIFER LOPEZ IS GREAT IN THIS PART. THIS SHOW HOLDS YOUR ATTENTION. THE WRITERS ARE VERY CREATIVE.

My husband and I LOVE this show…we don’t watch much on main stream tv but we absolutely look forward to Shades of Blue each week. PLEASE RENEW!

I LOVE this show! So much better than most of the mindless shows on now. Ray Liotta is the best! Can’t wait to watch it every week and I haven’t felt that way about a show in a long time. PLEASE do not cancel this show!

Love the show and I like her acting, I think she is beautiful and talented.

We were amazed that Jennifer is the perfect actor for the role of Harlee. She is really, really great in this show!

This would be a great show but the gay stuff is sickening and I will not watch it anymore for that reason. Why do we have to have that kind of stuff crammed down our throats

After loving the Pilot, episodes 2 and 3 were my last.
Sorry – Jennifer can’t act.. seriously in this series it hurts.. Her timing is off, she is not a convincing cop.

Ray’s role is good, but I think they should have did a bit more with it. He is a great actor and they could have highlighted this more.

2 out of 10. This should most likely won’t make it past the 1st season.

Time enjoying it, both seeing Ray and Jennifer

Jennifer is a pretty lady, but she can’t act… when you see her against seasoned actors, good actors like Ray Liotta, you can see she is inadequate.
Looking at the show credits..I see her pa,l. Ryan Seacrest is the producer..
I predict it won’t last. Sorry, but she is not believable in the role..

This is my initial assessment from watching the pilot episode:
You both (Pete and Patricia Marshall) should have stuck it out, it turned out pretty good. I was thinking the same, as you two, from the beginning, but I persevered, and found it worth the watch. Anxious to see the development. But, my luck, I’ll get into the show, and it will be canceled. 🙁

Boring show..zzzz Turned it off the first ten minutes.

Watched this new show this evening. Turned it off half-way through. Felt the acting was bad, the story was trite…and it is simply a showcase for Jenny….Not worth the energy to watch. Jenny should stick to music.

excellent summary Patricia.
My thoughts exactly.
Jennifer is a nice person in life, but when it comes to Prime-Time acting – she just can’t do it.

I wiped it from my recording schedule.