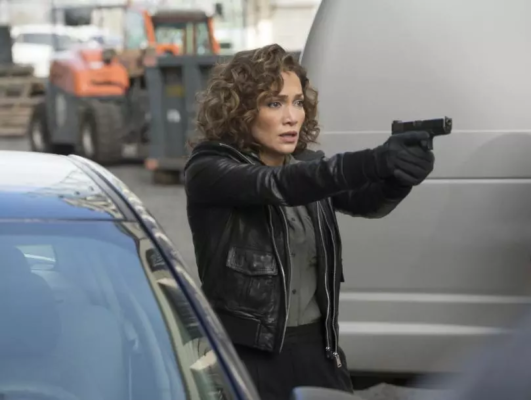 Shades of Blue is coming to a close soon. Recently, star Jennifer Lopez spoke with TVInsider about the NBC TV show’s third and final season.

Shades of Blue debuts its third and final season on NBC on June 17th at 10 p.m. ET/PT. In the interview, Lopez revealed the final season will deal with the fallout of season two:

You’ll see who survives and who doesn’t. This whole season deals with the aftermath of what they’ve gotten themselves into up until this point. That goes for Stahl as well.”

And how does Lopez feel about the series ending?:

It was a hard decision and I was melancholy the day we announced it. I wish I could do it for seven years, but I can’t with everything else going on.

I did both Shades and my Vegas show [All I Have, her residency concert at Planet Hollywood] for three years. My kids are 10. That’s a big consideration for me. We put things on hold in life. We’re like, “OK, we can do this! We’ll push that there, push this here.” But we can’t.”

What do you think? Are you a fan of Shades of Blue? How do you want the series to end?

I can’t understand why Lopez chose to start the show knowing her plate was full. Did she expect to just run a couple seasons?

It was a well done show and showed Jennifer Lopez as a serious actress. If this series ends, I hope she finds another dramatic series or movie. However, she is right. Her kids are 10 and she knows how little time she has left with them as children, at home.

I super bummed this series is ending! I thought it was a phenomenal show. It’s very few shows on television now that has the ability to draw you in like this show did. Action packed, suspenseful and great acting. Hate to see it end!!

I do NOT want it to end. Love the twists and turns and the acting is top shelf. Please rethink this decision to end it.

I Love Shades of Blue! I am so disappointed that it has been canceled. Seems like just when we get invested in the characters networks cancel the shows. I think it’s a mistake to cancel it. However, at least we get an ending of some sort. We usually just get left hanging on what happened to characters. I really wish NBC would have a change of heart and renew it. If JLo needs out, then right her out. Ray can definitely carry this show on his own with the rest of the cast. I started watching it from the beginning… Read more »

I don’t want to see it end either. I love Jennifer Lopez and Ray Liotta, Jennifer is so talented in anything she does. I’m afraid to watch the last show, I don’t think an hour will be enough, please let it end great!!!

Let the series continue minus Lopez. Her character can be written out. Ray Liotta holds his own. The show can survive this.

Get someone more diplomatic with a better sense of justice, younger and more virtuous always breaks hearts when it comes to single parenting, etc. the other actors are much more talented to a patriotic network!

I’m sad that it’s been canceled… I love the show!!!
I wondered why it was over then I see KLG & Hoda The 4th hour of The Today Show with Ray Liotta talk about that it was canceled that he and Jennifer Lopez wanted to continue. Please don’t cancel

This was entertaining but so over the top that it also seemed almost insulting as a cop drama. I look forward to them wrapping the story lines up and sending them off to prison/death/freedom/witness protection or wherever their journey’s may end.

I have absolutely loved this series since Day One and am extremely saddened by the announcement that it is ending. This is the best “cop show” I’ve ever seen and have enjoyed every episode. The acting is and has always been top notch and the casting could not be better. I’ll miss you all.

yes I agree but everything must come to a end and the ratings fell down . So they wanted to stop it before it was forced to be cancel I understand. But I am going to miss it terribly Jennifer and Ray and the whole entire cast can really truly act. some scenes on other shows you say to yourself I could have act better than that..