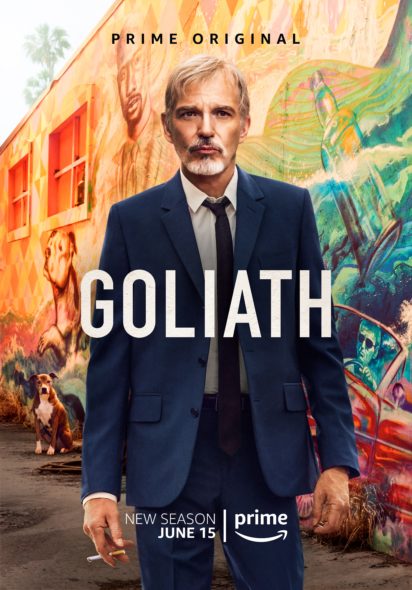 Is Billy McBride at the top of his game during the second season of the Goliath TV show on Amazon? As we all know, the Nielsen ratings typically play a big role in determining whether TV shows like Goliath will be cancelled or renewed. Amazon and other streaming platforms, however, collect their own data. If you’ve been watching this TV series, we’d love to know how you feel about the Goliath season two episodes. We invite you to rate them for us here.

What do you think? Which season two episodes of the Goliath TV series do you rate as wonderful, terrible, or somewhere between? Should Amazon cancel or renew Goliath for a third season? Don’t forget to vote, and share your thoughts, below.

This is a great series. My husband and I watched both seasons and it had us going from the first episode. Please renew it for more seasons. Billy Bob Thornton is a great actor along with all the cast mates. Love Patty’s character.

Please renew this suspenseful series. The actors are excellent. This season was a nail biter.

Please please please renew Goliath!!! Great show and Billy Bob is so good and so is Patty!
Also my husband loves it, we’re sad now that season 2 is over!

Please renew GOLIATH, this by far has been one of the best series I have watched in a very long time.

Goliath is by far one one of the best series I’ve seen in a very long time! Please do not cancel this show! Bring in season 3! And make it quick! I thought the season 2 outdid season 1, which, by the way, I couldn’t stop watching until the end. Season 2 had me on edge the whole time. The writing is amazing and the acting is incredible! LOVE LOVE LOVE this show!

this show should have many more seasons. it’s a very good drama!

I love this show and yes it should continue.

I think Goliath is an excellent show and the perfect vehicle for Billy Bob Thornton. The well-written stories and the talented cast keeps us yearning for the next show. Please renew!

Awesome show, can’t stop watching, there are no boring minutes while watching. I thought season 1 was good until I watched season 2, powerful show. I enjoy how each season is about the same case .

was more crude and violent than needed. plot was good, blood and gore was a turn-off. do season 3 more in the vein of season one, please