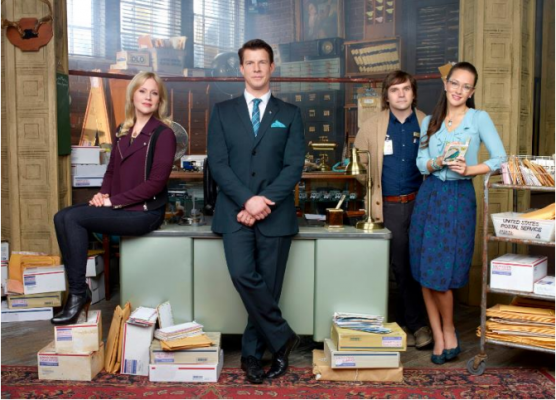 Are you a fan of Signed, Sealed, Delivered? Recently, stars Kristin Booth and Crystal Lowe spoke with the La Crosse Tribune about the future of the Hallmark Channel franchise.

From Martha Williamson, the TV movie franchise began as a show in 2014 and follows four postal workers who find the recipients of undelivered mail. The cast includes Eric Mabius, Kristin Booth, Crystal Lowe, and Geoff Gustafson.

In the interview, Lowe said she hopes there will be honeymoon for her character, Rita, in future installments of Signed, Sealed, Delivered:

And as for her character, Shane, Kristin Booth says she’s hoping for a wedding:

And of course we all want to see a wedding for Oliver and Shane as well because that relationship has been through it’s ups and downs.”

The most recent Signed, Sealed, Delivered movie, To the Altar, premiered on Hallmark Channel on July 15th.

What do you think? Do you watch the Signed, Sealed, Delivered movies? Who’s your favorite character?

I have to watch Signed, Sealed adn Delivered in DVD form as here in Australia I cannot get the Hallmark connection. Please continue on with this series as it is inspirational as we go through some of the most difficult times. Ps, cannot wait for the next and new DVD…..alas will have to!

I enjoy all the lead people in Signed, Sealed & Deliver. Plot has a positive message for us.

Please have a wedding for Oliver and Shane with a long life together. In such troubled times it is so nice take some time to let ourselves visit another world of decency, respect, live and hope. Please make more. The characters are so believable. Love Oliver and Shane.

Thank you so very much for the wonderful series with real people and kindness. I found signed sealed and delivered while in isolation. It was so refreshing to see drama, comedy and love at its finest. I laughed and cried with every episode and couldn’t have been more entertained. I Love ❤️ Oliver’s heart and gentlemen spirit. So looking forward to seeing what the future holds for the DLO. Kindness and True Love.

I lost my husband a few months ago and for reasons I can’t explain, these movies have helped me immeasurably. I think probably it’s because of the true love that the characters feel for one another and the deep and innocent love the couples share. with each other, in spite of the fact that Oliver doesn’t seem to realize that he is indeed in love with Shane and to me it is so heart warming and refreshing. I don’t know how it could not make someone smile and feel better. I have DVDs of all the movies as well as… Read more »

My favorite character is Oliver. I love his quirkiness! I love how he and Shane interact and how she is bringing him out of his shell!

Yes, I will definitely watch it! I am a fan. I love the series and hope it will run full season and seasons to come. I have purchased every movie of Signed Sealed & Delivered and watch them over and over again.

Our family has watched every sign sealed delivered movie and all of series one. It is an amazing show, it has become our favorite. Thank you so much for continuing it. We greatly appreciate it.

I would love to watch more movies of Signed Sealed Delivered! Hope yo make more!

The themes of the episodes have all been unique and far above the quality of most t.v. series of the same genre and the main characters ably portray the nuances of the scripts. The two couples have a wonderful chemistry, as well as a deep friendship for each other. I look forward to a continuation of this franchise.

I went into the post office in our small town, and told the young lady who has worked there for about ten years about the show. She hadn’t seen it, but got excited when I told her about it, and she started telling me how they deal with undeiiverable mail. The way she was talking, she could have been one of the POstables. It was like I had walked into a scene from one of the shows!

I’m so happy to hear we can expect another movie from the Postables! I too would like to see the newlyweds go on a honeymoon & the other lovebirds have a wedding. You can’t leave us hanging with a marriage proposal.
I’m so happy!!!! I can’t wait!!

I love this show. I realized one day as I was watching an episode of Signed, Sealed and Delivered that I was smiling. This show makes me smile. It’s so tender and sweet and innocent. And though I adore all the characters, Oliver is my favorite. He is such a Gentleman’s Gentleman.

I think Signed, Sealed and Delivered. I love that my whole family can watch it and I don’t have to even think about something inappropriate popping up in the story line. Great acting by all!!

I never expected this to be such a great show. Everyone I have told to watch it loves it!! Hoping for more. TV show would be great to see again!!