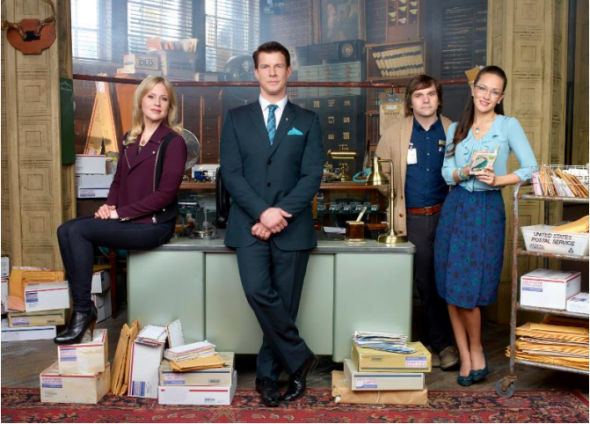 Hallmark Channel is making an unusual move. They’ve decided to change their Signed, Sealed, Delivered series from a regular weekly series to a series of two-hour movies on sister channel Hallmark Movies & Mysteries.

The first new movie — Signed, Sealed, Delivered For Christmas — will air on November 23rd. Three more films are expected for 2015.

Crown Media Family Networks announced today that Hallmark Channel original weekly scripted series, “Signed, Sealed, Delivered,” executive produced and written by Martha Williamson (Executive Producer of “Touched by an Angel”), will move to sister network Hallmark Movies & Mysteries as a movie franchise consisting of a series of two-hour original films. Debuting on November 23 at 9pm ET/PT, 8C, “Signed, Sealed, Delivered For Christmas” will be the first movie in the franchise, with three more slated for 2015.

“We are delighted to be continuing our partnership with Martha Williamson and to bring her brand of rich and poignant stories to viewers on Hallmark Movies & Mysteries,” said Michelle Vicary, executive vice president, programming and network publicity, Crown Media Family Networks. “At their core, the narratives on ‘Signed, Sealed, Delivered’ revolve around mystery and suspense, with compelling characters and dramatic storylines that will be enhanced by an extended format.”

“When Bill Abbott and Michelle Vicary asked if I can evolve the ‘Signed Sealed Delivered’ franchise into a series of movies, I was honored to continue the Hallmark tradition of quality family movies,” said series Creator and Executive Producer Martha Williamson. “At the heart of ‘Signed Sealed Delivered’ is Oliver, a modern day gentleman with old world values played brilliantly by Eric Mabius,” she added. “He and his wonderful team of postal detectives will continue to surprise us and sometimes make us laugh as they work to solve mysteries behind letters, even mysteries of life.”

Hallmark Movies & Mysteries will introduce viewers to the “Signed, Sealed, Delivered” franchise by airing a marathon of the series on Saturday, October 11 from 11am – 11pm ET/PT, 10C.

“Signed, Sealed, Delivered” is a comedic drama that follows the lives of a group of postal workers who transform themselves into an untraditional team of detectives to track down intended recipients of undeliverable mail. Their missions take them out of the office into an unpredictable world where redirected letters and packages can save lives, solve crimes, reunite old loves and change futures by arriving late but somehow on time.

“Signed, Sealed, Delivered” is a Muse Entertainment production in association with MoonWater Productions. Executive Producers are Martha Williamson (“Touched by an Angel”), Joel S. Rice (“Cyberbully”) and Michael Prupas (“The Kennedys”). Harvey Kahn (“The Haunting Hour”) is the producer.

Recently rebranded from Hallmark Movie Channel, Hallmark Movies & Mysteries is a 24-hour digital cable network featuring a unique mix of content, including all new original movies that are dramatic, cinematic and thought-provoking; new original mystery movies that focus on the lighter side of the suspense genre, as well as classic acquired series such as Murder She Wrote, Matlock, and Perry Mason. The network is also home to annual holiday programming franchise, the Most Wonderful Movies of Christmas, as well as presentations from the award-winning Hallmark Hall of Fame library. One of television’s leading destinations for compelling family-friendly entertainment, Hallmark Movies & Mysteries can be seen in 55 million homes in SD (Standard Definition) and HD (High Definition) and remains one of the fastest-growing networks in cable. Along with sister network, Hallmark Channel, Hallmark Movies & Mysteries is the second linear channel from Crown Media Holdings, Inc.

Muse Entertainment is a leading film and television production company and international distributor known for its well-crafted and high-quality productions. Since its founding in 1998, Muse Entertainment has won over 100 awards and garnered over 300 international award nominations. Muse Entertainment is currently shooting the 6-hour event series “Tut” in Morocco and the second season of the sci-fi series “Helix” in Montreal. Most recently the company produced four seasons of the supernatural dramatic series “Being Human”, the first season of the dramedy series “Signed, Sealed, Delivered,” two seasons of the wartime dramatic series “Bomb Girls” and several TV movies for Disney and Hallmark channels. Muse’s 8-hr. historical drama “The Kennedys,” sold to networks around the world by Muse Distribution International, earned 10 Emmy Award nominations, winning four, as well as the DGA award for best director. Its 8-hour event series” Pillars of the Earth” also won an Emmy and many other awards. Muse’s other award-winning programs are “Cyberbully,” “Durham County” (Seasons I, II, III), “Ben Hur,” “The Last Templar,” “Impact,” “Human Trafficking,” “Answered by Fire,” “This is Wonderland” and “Tales from the Neverending Story.” Muse Entertainment maintains production and development operations in Montreal, Los Angeles, Toronto and Vancouver. For more information, please visit www.muse.ca

What do you think? Is this a good move? Would you prefer that it continue as a weekly series or are you okay with a series of movies instead?

I am disappointed as well. I like the weekly format much better. I didn’t miss an episode of this series. I enjoyed it weekly just like Cedar Cove and When Calls the Heart. Hope they change this decision.

Me too, I watched them all and will miss the weekly series.

I am extremely disappointed with the decision to cancel Signed, Sealed, Delivered as a series. It is the first tv series that has captured my heart in many years. I fell in love with the characters and eagerly anticipated each new episode. This show was proof that tv can be be great with interesting stories and intriguing characters without abandoning wholesome family values. I will watch the movies but will now have to wean myself from the passionate attachment I had developed for the show’s characters. An occasional movie isn’t enough to satisfy that high level of interest.

I agree with being disappointed that Signed,Sealed and Delivered isn’t airing each week–love the perfectly cast characters, the wholesome family values, the interesting and inspirational series…we invited others to see the episodes with us; terribly disappointed that it isn’t on each week!!

I really loved the weekly series, my husband & I watched them faithfully. There is so much violence, sex, people with no grasp of the English language, {Swearing, every other word}, on TV and movies, Signed, Sealed, & Delivered, is clean and always has {The moral of the story is} . It is something I would watch with my grand children and not feel I had to fast forward or say this is not suitable. We don’t watch anything rated R and that leaves out movie after movie. Signed, Sealed, & delivered makes a person feel good at the end,… Read more »

I love this series and so does my 11 yr old daughter. It is hard to find uplifting shows that inspire hope. I am glad there will be movies but am very disappointed in not having a weekly series. I do watch Cedar Cove but do have to fast forward thru it because it is so dramatic! Hard to relate to in my life–I have drama but not that much! Also my daughter is not engaged with adult drama which I am glad of. But it is missed that Cedar Cove can not be a family show to enjoy!

I would prefer a weekly series.

Before premiering the 2-hour movie, in November, I hope Hallmark will re-air all the past episodes so I can catch up before the November movie.

Tomorrow on the Hallmark Movie channel they are doing an all day marathon of the Signed Seald & Delivered series. We can start right away! I have been checking to see if it was renewed too. I love the wholesome, hopeful shows on Hallmark channels. I loved the When Calls the Heart series just as much. They are uplifting, in this world with so much sorrow.

They said in the article above that they are doing a 12 hour marathon tomorrow from 11 am to 11 pm.

I prefer the hour format. It was a show I looked forward to watching each week. Two hour movies are fine but the premise of the original show is more appealing to me than the two hour format.

I hate that it will not be continuing as a series. Loved, loved loved it. Hopefully, the movies will continue on a regular basis.

I would like to see the show back on the Hallmark channel.

Just LOVE, LOVE, LOVE! SIGNED, SEALED, DELIVERED! Would love to see it out on dvd. What channel is it on? For the marathon.

The Hallmark Movie channel for the Marathon tomorrow.

I LOVE, LOVE, LOVE this series and am glad we can still see it, but very disappointed it won’t be a series and that it is moving to a channel not everyone has.

I don’t usually go in for the overly sweet shows, but I liked this one. I like the characters and the chemistry they had.

As usual a show the public likes that is in the genre of THE GOOD WIFE, BLOOD & GUTS, or some WEIRD PSYCHOLOGICAL THRILLER, OR WEIRD SYFY stuff the networks or cable channels don’t seem to think that a portion of population do not deserve to entertained by a nice show like SIGNED, SEALED, DELIVERED.

Why did they have to move it to the Hallmark Movie channel….I don’t have that channel in my package & it would cost me more to add the channel on & I already have a high cable bill. Did they have enough viewers that they couldn’t renew it for a second season as a series?? They may have lost a viewer!! ARGGGGGH!!!

This displeases me! Loved this series. Why not keep the movies based on the series on the same channel? My DirecTV pkg includes the Hallmark Channel, but not the Hallmark Movies and Mysteries channel. If I want to add it to my pkg it costs tooooo much money for what else is offered. DirecTV’s bill is already too high… Nothing anyone can do, just venting!

I know what you mean Georgia. Sometimes I think they move things around just so we will buy other pkgs. It wouldn’t hurt if you called DirecTV and told them. Sometimes they DO listen. You were so nice in what you wrote that I’m sure you will be nice when you call. The person you will be talking to isn’t the person in charge they just take all the guff.

I agree as well. I do not get the Hallmark Movie Channel either. I’d prefer the wkly series but I’m sure the decision is made and they really won’t value our comments. So sad to not be able to watch it anymore.

I have the cheapest direct tv package, and I get hallmark movie and mystery channel on 565. It was hallmark movie channel previously, so see if that’s on your guide