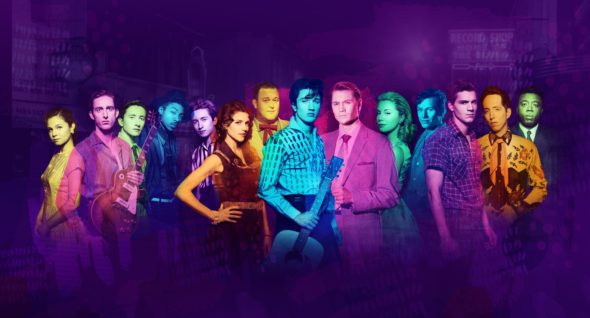 When will the fat lady sing? Has the Sun Records TV show been cancelled or renewed for a second season on CMT? The television vulture is watching for the latest cancellation and renewal news, so this page is the place to track the status of Sun Records season two. Bookmark it, or subscribe for the latest updates. Remember, the television vulture is watching your shows. Are you?

The first season of Sun Records averaged a 0.13 rating in the 18-49 demographic and 585,000 viewers. Find out how Sun Records stacks up against other CMT TV shows.

Sun Records got off to a mediocre start and the ratings dropped quite a bit after that. CMT has very few scripted series and this one attracted about half as many viewers as the first half of season five of Nashville. Sun Records could easily be cancelled.

5/5 Update: CMT has confirmed there will be no season two of Sun Records. Details here.

What do you think? Should Sun Records be cancelled or renewed for a second season? Would you follow this drama series to The CW or Amazon?

I just watched this season & loved it! I’m so disappointed that it’s over! It so interesting because it’s a true story. There’s so much more to tell

this was sooooooo good. stupid decision

Please bring this show back it was the best on TV I looked forward to this. It took me to another world when I would watch

Yes, I would watch Seasons 2 and 3 of Sun Records on any station! Why are the really good shows like Memphis Beat,
Dallas and Sun Records cancelled and lousy shows renewed?

Had I know about this show before it was canceled, I’d have been watching & spoken up to SAVE it. I saw a few reruns & thought it was GREAT!!! It brings back such great memories of the 50’s & 60’s. These kids today don’t look back at the greats; the ones that made music what it is today. Elvis was & will always be KING! Please reconsider bringing this back. With all the channels to watch today, some folks may not even pick up this channel it was broadcast on. It should have been promoted on ABC, NBC &… Read more »

Would watch a second season. Loved the show

I certainly would follow this show on any station. It’s good for young people to know how and where music came to pass, and the greatness, these musicians brought. This is where the best started. Give the future younger generation a great, enjoyable history lesson they can and will enjoy and learn from. This was a great show. Why CMT cancelled it, I’ll never know, long

Loved this show. Too bad it was canceled. Would definitely watch a second season.

Very disappointed this show wasn’t renewed. I made a point to watch or set the timer and record it. I think it is always interesting to know how things get started especially rock and roll. I was really excited about this show from the first trailer and wasn’t disappointed. Sorry it didn’t keep going.

Please do another season! We really like this show! I dvr’d it so I can rewatch it!