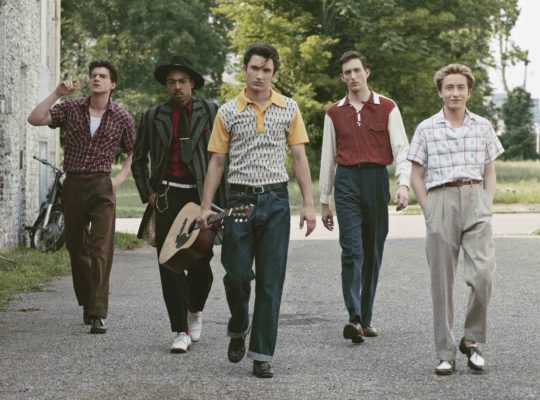 Will the music play on for Sun Records? The CMT TV show recently finished its first season, but what about a second? If renewed, would you keep watching the series?

The chances of a renewal for Sun Records are uncertain. The show premiered to a decent rating (for a CMT show) of 0.20 in the 18-49 demo and 971,000 viewers. However, the ratings fell considerably over the course of the eight episodes.

Overall, season one averaged a rating of 0.13 in the 18-49 demo and 585,000 viewers. That’s a considerable drop for a new series on a network that is new to scripted programming. Will CMT risk another season? For now, we’ll have to wait and see.

What do you think? Have you seen Sun Records? Do you think the show should be cancelled or renewed for a second season? Would you watch?

5/5 update: CMT has decided there won’t be a second season of Sun Records. Details here.

I loved this show and never missed it. If you have of did a census of tv viewers 50-70 I think the numbers would change. I never missed it and watched multiple times. I know its been off a while but seems like CMT would have a lot of time slots this could fill.

Great show. We love it. Need to get the word out about it. We stumbled across it. Didn’t know about it until the 2nd show. Please keep it on.

Definitely, I really liked the series. A little corny at times but believable for the period and after all there was Elvis!

We loved the show and always recorded it. Please rethink your decision.