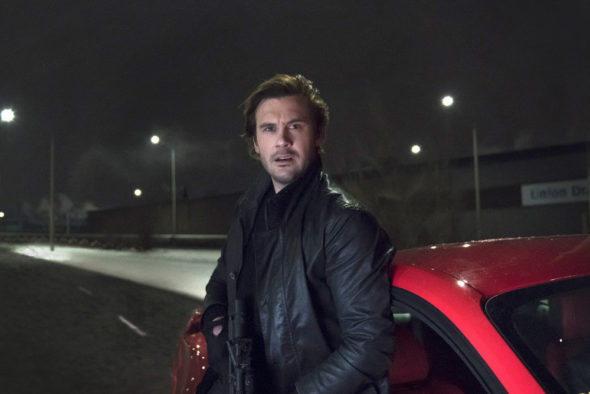 I enjoyed the Taken TV series. I would wish for it to comeback for multiple seasons. It reminds me of 24, a good guy, good morals, doing good things for our country. Low ratings does not always mean a cancellation- something like Taken should be regarded as a perfect fit for conservative viewers. Please strongly consider bringing it back.

I love taken it’s one of my favorite shows and I was angry when I saw it was cancelled there’s a lot of my favorite shows that has been cancelled this year for some reason lame shows and it upsets me a lot especially when I look forward to them every week. I have kids my life is stressful so watching my shows every week is an out and a time to chill out and relax but when you take them away I no longer have that out.

I couldn’t believe it had such low ratings. Maybe there’s something wrong with me, but I loved it. Couldn’t wait for the next episode. I really hope I get to see more seasons later. I think that would be great.

I had no idea it was rated so low. I couldn’t never wait for the next episode. I really hope I get to see more seasons.

NBC!! REALLY!! WHY!! I understand you are all about ratings and stuff but why can you not just do an online veiwing for the millions of us that actually LOVE this show?? I am so tired of you all removing things that I enjoy and putting in more shows that you will snatch from us. I believe customer appreciation is at an all time low. Shuch a bummer you have become!!

I love that show. It rivals black list and seal team amount my favorites. I definitely would love to watch a 3rd season and more seasons of Taken.

Hopefully Hulu or Netflix will pick it up and give us 10 more seasons 😉 love love love this show.. and noteworthy enough my son loves to watch this after dinner EVERYDAY until the season ends and he is super excited about the start of the next season. Please please please continue this great story for us to experience.

Taken needs many more seasons. To be honest, I wanted to see more faster. Hopefully Netdlix or Amazon will make it a series to co to ue viewing. Only problem I had viewing was I had to stream it after it premiered due to work. I was faithful to streaming it as it was one of my favorite shows. Maybe that’s another dynamic networks are missing; Nielsen reports aren’t that accurate.

I am hoping Taken will be picked up by another network. One of the best shows on TV. Maybe we could do away with one or two of the nauseating reality shows and keep excellent shows like Taken and Deception.

OMG…This is one of my FAVORITE shows. I look forward to it every week and then to the next season
PLEASE PLEASE renew this show NBC and if you won’t I am keeping my fingers crossed that another channel picks it up. Acting is superb by all of the cast and so much more can be explored.

I really hope someone picks it up for a lot more seasons. The best action series and great cast. All for it.

I would definitely watch season 3 plus more. I love the show.

Love the show looking forward to a season 3

Taken is one of the best shows on TV. You keep pure garbage like the Kardashians on and take decent entertainment like Taken off the air. I am thoroughly disgusted by network programming for the most part.

Mista B
Reply to  Ruth McDowell

Ditto Ruth. I could care less about the Kardashians and their So UnReal Reality Show. Shows like that are superficial and toxic to the future of society. Taken is more engaging and thought provoking. As a child, my Dad’s favorite show was The Rifleman as well as many other westerns. Today he likes watching Scorpion and he’s almost 80. He still likes the action, suspense and mystery which Taken has all of. Seriously Bring Back Taken. It’s even far more entertaining than American Ninja. Yeah, I said it. Both American Ninja and ANYTHING Kardashian are the least of my desired… Read more »

Man amen to that. I loved Taken now What my garbage are they going to replace it with? I just will not watch NBC anymore. My way of boycotting their decision.

TAKEN is a great action drama with excellent acting. I don’t understand how a show like Elementary could still be on TV and they would take a show like this and cancel it after two seasons. There is little to watch as it is> I hope it is picked up!

I agree with Pam…all the good shows are cancelled. I could watch Taken for 20 seasons!! Great show great acting. I hope someone picks it up!!

i just watched all the episodes and couldnt put my phone down i loved the show it just gets better and better as it went everytime i find an awesome show that really reals me in it get discontinued maybe thats why ratings are down everyone is afraid to get into it in thought this would happen. since i started watching this i have told my boyfriend its so good im going to cry when i get to the last episode and have to wait for the new season now im super super sad because now i might not ever… Read more »

I really enjoyed this show and it is my hope to see it continue in the future perhaps on another network!!