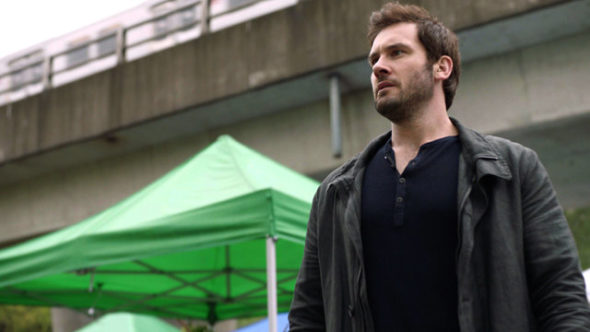 Has Taken been cancelled? It looks like NBC has removed the low-rated TV show from their schedule.

Season two of Taken has five more episodes left and is set to air on Fridays until its season finale debuts on May 18th. However, NBC’s online schedule tells a different story. Taken is absent on both Friday, April 20th’s slate and subsequent weeks.

It’s unclear why NBC has pulled the series now, but it may have something to do with Taken’s low ratings. So far, season two is averaging a .44 rating in the 18-49 demo and only 2.764 million viewers.

What do you think? Are you watching Taken? Do you think it should be renewed or cancelled?

George, Waiting to see if Christina Hart comes out of the coma, my favorite show when it was on Netflix.

The story line is awesomel but may need to add more strong characters there. Concerning Christina Hart we didn’t know if she’ll survive or not. Bring back Taken.. Add some help for Brian Mills and Santana.. Kilroy is good he needs some help as well. BRING BACK TAKEN!

I LOVE this show!! PLEASE DO NOT pull the show without at least ending it. I HOPE you renew it. Put it on a different night….

I love love love this show. Why aren’t the good ones promoted more instead of cancelled?

I love love love this show. Why r the good ones not promoted more instead of cancelled.

I loved the 1st season of Taken then it was gone to long to come back with season 2 and it’s different? Season 1 was so good… Season 2 not so good!!! The acting is bad

We love Taken, it’s a great show in the spirit of Mitch Rapp! Friday night is a tough time slot as so many go out or entertain that night but we watch or DVR every time! We will be soooo disappointed if it disapoeRs!

Taken is a great series, it needs to be given a chance, don’t rip it from the screen yet

That is one of the best shows on!!! Please don’t pull the rest of the season and renew, please!!

Please do not cancel, it is great show with great actors

What do they expect when it is on one week then off then at 8pm then at 7pm then back to 8pm?