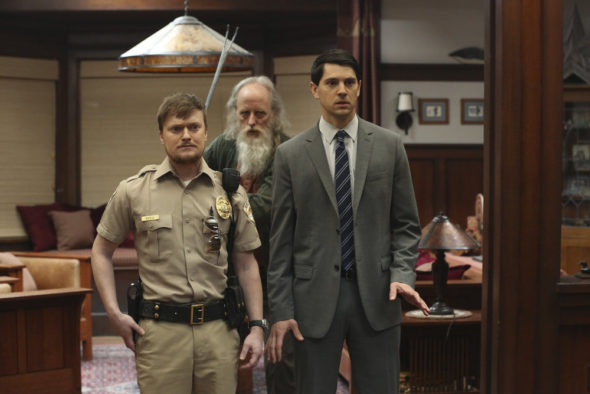 Will there be another season of Trial & Error? Deadline reports NBC has decided not to pick up the TV show for a third season.

Season two of the anthology comedy stars Nicholas D’Agosto as a new lawyer tasked with defending a highly eccentric heiress (Kristin Chenoweth) after a body is found in the trunk of her car. The cast also includes Krysta Rodriguez, Steven Boyer, Jayma Mays, and Sherri Shepherd.

According to Deadline, NBC‘s window to renew Trial & Error for a third season has passed. And while the network has not officially announced the show’s cancellation, production company Warner Bros. is reportedly already shopping the comedy around to other networks.

Trial & Error is only a few episodes into it second season, but ratings haven’t been great. So far, the series is averaging a .48 rating in the 18-49 demo and 2.439 million viewers. That’s a near 50% drop in the ratings compared to season one.

What do you think? Are you a fan of Trial & Error? Do you want a third season?

Please I beg you give me another season! This show is so intelligent & makes me laugh out loud. Writing, amazing! Acting, perfection!

Please bring this show back! Best show since Cheers. Writers deserve an award. Please, the phone was ringing, they have a new case. Let’s see what’s next.

Should definitely be a season 3!

Nobody even knew it was on. No publicity. NBC error

This is a show I look forward to all week! It always has me laughing and I love love love the witty humor and the story of those peckerheads. Please bring it back for a third season!

We can’t believe this isn’t going into season 3! It’s so funny. We watched a couple episodes of it on demand with our 22 year old son and a friend, both college graduates, and we were all laughing. This should definitely be renewed. Something funny and mostly clean for 20 year olds to finally watch.

I was looking forward to season 2, but I’ve found the writing to not be up to par of season 1. I don’t think Kristin Chenoweth’s talent is fully being used

i only wish i knew it had started up again, i didn’t see any promo for it

i love this show. its authentically funny and smart.

I LOVE this show! The writing is spot on and I find myself laughing out loud throughout. I can’t believe NBC isn’t renewing.