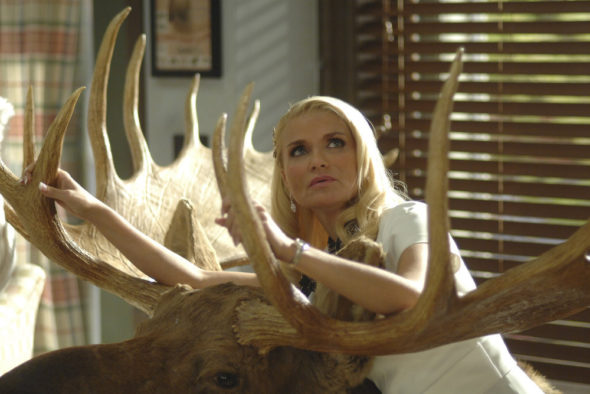 Will there be a retrial? Has the Trial & Error TV show been cancelled or renewed for a third season on NBC? The television vulture is watching all the latest cancellation and renewal news, so this page is the place to track the status of Trial & Error season three. Bookmark it, or subscribe for the latest updates. Remember, the television vulture is watching your shows. Are you?

An NBC comedy anthology series, the second season of Trial & Error stars Nicholas D’Agosto, Krysta Rodriguez, Steven Boyer, Jayma Mays, and Sherri Shepherd. New in season two are Kristin Chenoweth as heiress Lavinia Peck-Foster, and Amanda Payton, who plays Nina Rudolph, a hip New Yorker who has relocated to East Peck. The story centers on new lawyer Josh Segal (D’Agosto), and his team, as they on their next case in this small Southern town.

The second season of Trial & Error averaged a 0.43 rating in the 18-49 demographic and 2.05 million viewers. Compared to season one, that’s down by 53% and 47%, respectively. Find out how Trial & Error stacks up against other NBC TV shows.

1/17/19 update: NBC passed on ordering a third season of Trial & Error. Warner Bros. TV attempted to find a new home for the series but was not successful. Details here.

What do you think? Were you hoping that the Trial & Error would be renewed for season three? Are you sorry that NBC cancelled this TV show, instead?