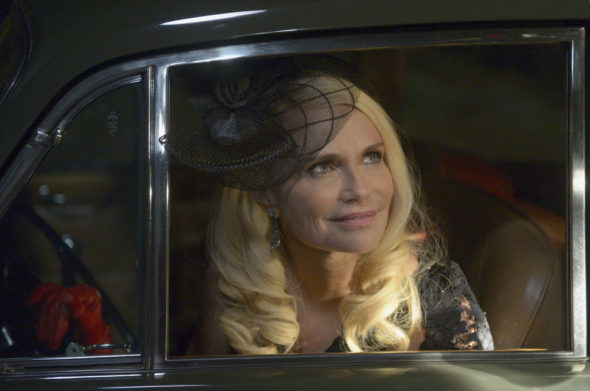 It looks like Kristin Chenoweth is the new John Lithgow. NBC has announced that season two of their Trial & Error TV show — subtitled Lady, Killer — will debut on Thursday, July 19th, at 9:00 pm.

Chenoweth is joining the cast as the defendant of the season’s big trial. Lithgow played last year’s quirky defendant, Larry Henderson. There was talk that he might make an appearance in season two but NBC’s release doesn’t mention him.

Here are some more details about the return of Trial & Error on NBC:

The first season of “Trial & Error” is now available exclusively on the NBC App and Video on Demand.

Critics were fans of the first season, with Vulture writing, “Deconstructing and poking fun at true crime is a great idea, and ‘Trial & Error’… has some real fun with that.” Entertainment Weekly added, “The true-crime genre was due for a good zinging. It got one.”

In the spirit of true crime documentaries, the second season of this outrageous fish-out-of-water comedy centers on bright-eyed New York lawyer Josh Segal (Nicholas D’Agosto), still relatively a newcomer in a tiny southern town, who is sturdily posed for his next big case there. His mission? To defend the eccentric first lady of East Peck, Lavinia Peck-Foster (Kristin Chenoweth), known for her flamboyant outfits, large hats and hairless cat, and who suddenly finds herself accused of the bizarre murder of her beloved husband. As Josh continues to settle into his makeshift office behind a taxidermy shop while working with his quirky team of local misfits, he suspects that winning his second big case this time should be easy (especially when his client is the town favorite), but is it?

What do you think? Did you watch the first season of Trial & Error on NBC? Do you plan to watch season two?

Last year’s show was very funny and a lot better than the comedies NBC is currently trying out. Too bad NBC doesn’t have faith in the show and they’ve opted to show it during the summer.