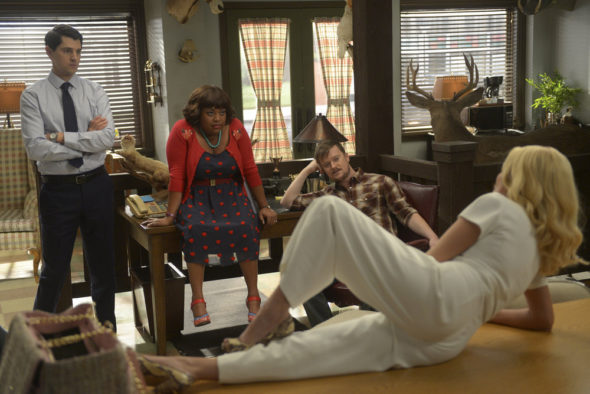 Render your verdict on the second season of the Trial & Error TV show on NBC? As we all know, the Nielsen ratings typically play a big role in determining whether a TV show like Trial & Error is cancelled or renewed for season three. Unfortunately, most of us do not live in Nielsen households. Because many viewers feel frustration when their viewing habits and opinions aren’t considered, we’d like to offer you the chance to rate all of the Trial & Error season two episodes here.

An NBC comedy anthology series, the second season of Trial & Error stars Nicholas D’Agosto, Krysta Rodriguez, Steven Boyer, Jayma Mays, and Sherri Shepherd. New in season two are Kristin Chenoweth as heiress Lavinia Peck-Foster, and Amanda Payton, who plays Nina Rudolph, a hip New Yorker who has relocated to East Peck. The story centers on new lawyer Josh Segal (D’Agosto), and his team, as they on their next case in this small Southern town.

What do you think? Which season two episodes of the Trial & Error TV series do you rate as wonderful, terrible, or somewhere between? Should NBC cancel or renew Trial & Error for a third season? Don’t forget to vote, and share your thoughts, below.

1/17/19 update: NBC passed on ordering a third season of Trial & Error. Warner Bros. TV attempted to find a new home for the series but was not successful. Details here.

Please don’t cancel this fun show! It is one of the few network shows I actually watch.

Trial and Error is best show since the Office. It was not marketed and NBC placed it hidden in a Summer lineup and some local channels aired football. Someone needs to wake up and renew Season 3.

Please continue to carry the show, Trial and Error. It is one of the funniest, most refreshing shows I’ve seen in awhile. The documentary feel to it combined with the quirky characters makes the show different and entertaining. In today’s world, we need all the laughter we can get. Quite a few people have just found out about Trial and Error recently, so the show needs more time. If you don’t carry the show, hopefully someone else will. NBC, you didn’t help the ratings by changing the season in which the show airs. I thought it would return in the… Read more »

Please bring Trial & Error and back for a third season! This is by far the funniest show on television the summer. My family and I DVR this show, even though we watch it live. It’s still just as funny the 2nd time watching it. We look forward to Thursday night for this reason. Its too funny not to laugh!

I really love this show!